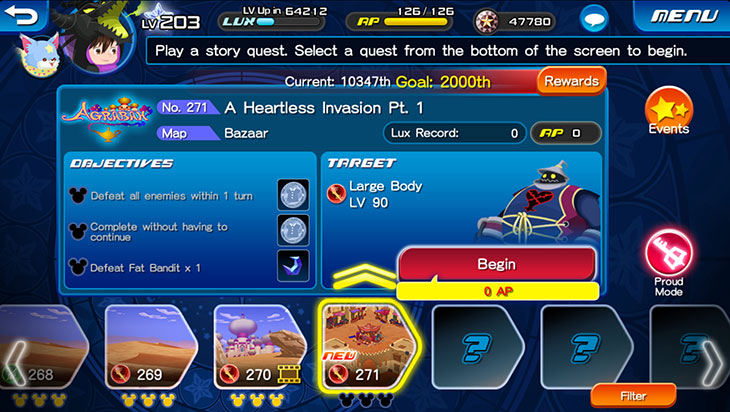 While looking for a blog post ideas tonight my wife said, “Why don’t you write about why you won’t play Kingdom Hearts Union X?” (she really wants me to play with her.) KH Union X (or cross or something) is the mobile Kingdom Hearts game set 100 years before the keyblade war or something. It uses a medal slotting system into a keyblade.

Overall a really awesome game that I recommend you check out, but the main issue I take with it is how repetitive the missions get. You’ll see from the image above that I’m on mission 271. My wife is on mission 678!

My wife has noticed during our nearly 3 years of marriage that she is more of a completionist than me, and also much more tolerant of repetitive tasks. Mind you she hadn’t played video games until we were married and I corrupted her.

She would be perfectly content going after all 880 moons in Mario Odyssey (which Graev already did a week ago) whereas I’m quite content stopping once I’ve found the easy-to-get and non-face-smashing-difficult moons. I don’t need to wear out my thumbs and get a migraine chasing after the elusive moons that literally get me nothing else after I’ve beaten the game. Something about repeating difficult tasks and failing drives me crazy.

I’m the same with with side missions in Assassins Cree Origins. After about 10 or so you quickly realize they all have this similar feel: ‘Help, the bandits stole or killed or hurt me in some way go kill them all, kthx’. After doing a few, I’ve lost the urge to do more.

I’m also the same way in MMOs when the tasks become too mechanically repetitive. That’s my main reason for hating the rinse/repeat quest model of filling your log with quests, doing them, then finding the next outpost to load up. They’re all the same, and I feel no desire.

When gameplay ceases to feel dynamic, I’m quickly over it. I think that’s a crucial distinction for me. I can do repetitive tasks like sit in a room in a dungeon in EverQuest or DAoC and kill the same mobs all day, but the experience is rarely mechanical. Trains, pull variations, mana pools, and other things keep you on your toes and not everything is the same. That’s also why I can play a game like AC: Origins and play the story missions for 20 hours straight — that story is evolving and keeping me moving forward despite the tasks themselves being nearly identical.

Going back to Kingdom Hearts, I’m also only going to tolerate killing heartless over and over without a story interruption. In KHUX it’s repetitive heartless rounds one after another, and rarely will they excite you with a story that disrupts my gameplay.

So that’s tonight’s random thought. I like understanding what makes games interesting or boring/agitating for me. The more I can drill down on all of these preferences of mine, the better.