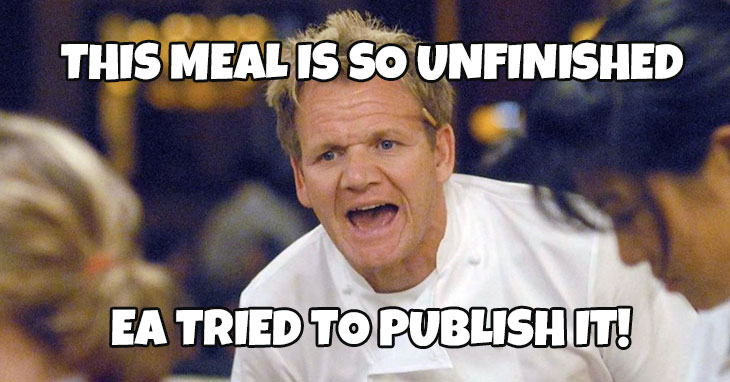 Today’s post was inspired by Fig, a member of the Keen and Graev Community who wanted to know my opinion on the whether or not games are releasing with less content, or if we’re simply consuming it all faster than ever before.

Games, when considered as a whole and not cherry-picking exceptions, are most definitely releasing with less content. For years, developers have used tactics like the dreaded DLC, Season Pass, Episodes, Bonus Content — whatever the heck they’re calling it now. It’s basically an excuse to make a game then filet it into pieces they can sell to you one bite at a time. Breaking a game up into pieces also extends the news cycle. MOAR POSTS ON THE NEWS SITES!

Somewhat related, games are also still releasing in an unfinished state. The epic rise of the “early access” model has fueled this fire, but it started back in the days of McMMO WoW clones. Remember those days? The Vanguard, WAR, Aion, etc., era?

We’re also blowing through content at breakneck speeds, but this issue is way more complex. Here are a few reasons we’re beating them faster.

I’ll toss in another point that I think goes hand-in-hand with these topics: Gamers lose interest faster.

The reason we have less content and we beat the games faster has to be indicative of how quickly we move from one game to the next. As kids, Graev and I would rent the same game from Blockbuster over and over. We spent months and months playing Donkey Kong Country. We spent YEARS playing The Realm, EverQuest, Dark Age of Camelot, and SWG. Heck, even in the older Call of Duty games (shout out to CoD4!) I’d clock a thousand or more hours. Now? I bet most people average playing a game for 2 weeks before moving on — whether they beat it or not.

The Streamer culture proliferates this problem. The “Variety streamer” as they’ve been dubbed play the newest, coolest, most popular games and will literally drop that game the VERY NEXT DAY when the next game that’s popular comes out. I have literally witnessed it happen. The bigger streamers will play a game for ONE DAY and the next day a game comes out again and they play it. I literally saw it this past week as we had a huge wave of launches. It’s absolutely insane. It makes people feel like they’re not cool when they aren’t playing the latest titles. This epidemic deserves its own post.

As always, your thoughts on these points to drum up conversation and debate are welcome.