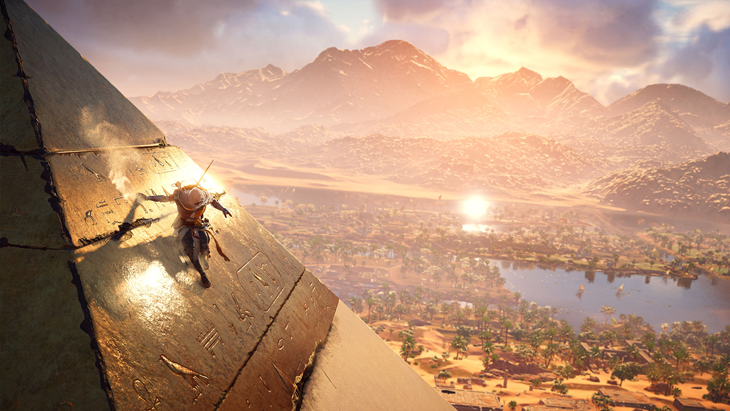 As a devout fanboy of the Assassin’s Creed franchise, you better believe I’m diving head first into Assassin’s Creed Origins. Set in the Egyptian era, and featuring some of the first (in a long time) major innovations for the series, Origins has me completely engulfed in its wonder.

A formal review will eventually come (before the end of the year), but to lead up to that review I want to write about things I love and experience as they happen.

I want to really emphasize the world in Origins. The Egyptian setting features places like Alexandria, Siwa, Giza, and Memphis. There are all sorts of deserts and crypts and open-world areas to explore. There are waters with boats, huge open deserts, grand ancient cities, and deep tombs. There’s so much to explore and see that some may even find themselves suffering from open-world fatigue.

The best way to explore the world and experience Origins first hand really is to just set off in a direction (generally toward a major story objective) and just see the world as you go. If you play to “complete” the world, you’ll burn out. Play to live the journey, on the other hand, and you’ll see the world naturally unfolds around you.

The world itself really plays a part in the experience. Traveling through the desert, I’ve already be faced with a burning bush (yep), mirages, hallucinations, ambushes, heat exhaustion (that I feel like quite literally lights you on fire), and even curses — yes, it was raining frogs at one point.

You’ll also feel immersed in the world by having to hunt animals to upgrade your gear. There are more RPG elements I’ll go into in another post at another time, but suffice it to say you have to have leathers, hides, pelts, wood, and ore to upgrade your gear — and you NEED to upgrade — so you’ll have to hunt to get those resources.

The last part of the world that I find so wonderful is your eagle, Senu. This eagle companion has replaced your dormant sixth sense that you had in past Assassin’s Creed games, and literally become ‘eagle vision’. You take control of your eagle and fly through the skies. This provides both an aerial view of what’s happening below, and an awe-inspiring view of the scenery around you. I sometimes take flight just to look around and explore the big picture.

If you like open-world games, Assassin’s Creed Origins definitely scratches that itch for me.