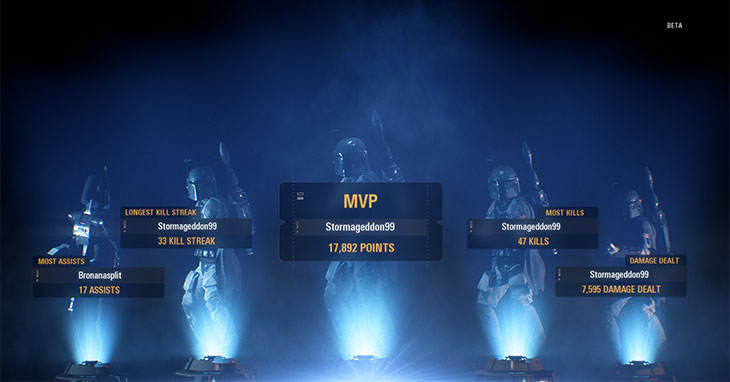 Battlefront 2 is all I played today, and I have no regrets. I'm still completely smitten by the gameplay, and finding it's exactly what I want in a 'get in and have some fast action' shooter-type game.

A couple of observations.

Hero Units are No Joke

Really, just take a look at this.

Don't consider this a complaint or anything. In fact I rather enjoy the fact that the hero units are serious trouble for everyone but other hero units.

Playing as Boba Fett, you're going to get those moments where people clump up and you kill 12 of them in one wrist rocket volley. Playing as Darth Maul, you'll rush into a room of 20 and be the only one to leave.

Saving points to play as one is usually my goal. Even a lesser unit like the Super Droids can turn the tide.

I played the space battle mode today and had a lot of fun playing around dog fighting. They did a much better job with space battles in this one compared to Battlefront 1.

First-person flight is a lot of fun and very immersive, though I feel there's rarely a time I'll do it when playing in third person feels like it's such a big advantage -- same holds true for ground play.

Rushing is a Great Way to Die

In most games, the minute you spawn you have this impulse to just sprint ahead and rush out. In Battlefront 1, that's the best way to die. Take your time. Slow down. Get a feel for the flow of the fight and figure out where the enemy is pushing.

Holding areas and advancing slowly with a squad will not only yield more points, but you'll hold your ground longer. Most people forget that the Ion disruptors on the Theed Galactic Assault spawn in the same place every match (a flaw, imo) and that holding those areas is all you need to do in order to win very, very quickly.