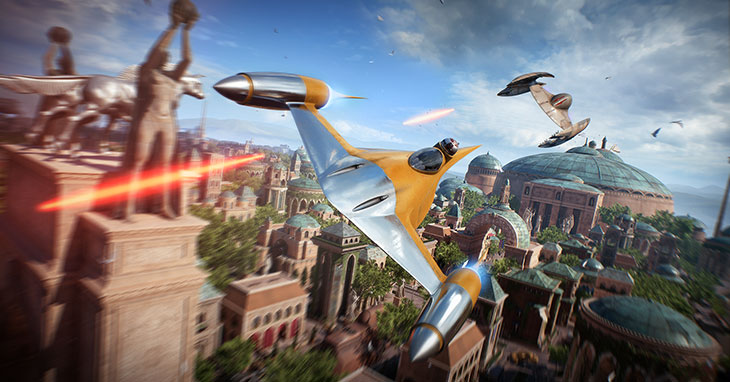 I'm going to keep these day 1 impressions short and sweet because anyone can download the beta and give it a try, as long as you're not one of those "Steam only on my computer" people. That stupid token system is gone! In its place we have a system where you accrue points while playing a match. These points can be spent on vehicles or special characters, which is a way, way better system.

Earning points is fairly easy. In most of my games played I scored somewhere in the middle to 80-percentile (one game I came in first) and was more than able to play any vehicle or special character available.

Scoring points in general (not the same as battle points) seems fairly balanced. I love how playing the objective earns bucket loads more than playing like it's a deathmatch.

Here's something a bit different. Upgrades to weapons can be crafted with what I think are called crafting points. These points are earned inside of crates (see below). Ahh, crates. Love 'em or hate 'em. I usually hate them. Battlefront 2 has a crate system where you can open a daily crate or spend points on them (yet another point system for playing the game).

Crates seem to be the biggest form of progression, at least from what I could tell. Crates give you the 'cards' or the big upgrades to your character.

There are already people putting on the tinfoil hats saying they found premium currency in the beta files. Reddit is abuzz with doomsday "omg pay-to-win" stuff. I haven't seen it yet, so I'll ignorantly give them the benefit of the doubt.

The beta map we're playing is the same Naboo map they showed at E3 where it's objective based to either destroy the Droid army's vehicle thing or to break into the Palace and secure it. Throughout the level there are objectives to claim or use, and doing so will skyrocket you to the top.

Air combat on the Theed map is pretty tough. There's not a lot of space to fly around, and I found myself quickly out of bounds. I also struggled to control the vehicles. I think I have to figure out my sensitivity settings because I crashed every single time. I can see how the air battles will be a blast, though.

Unlike Call of Duty WW2 -- which couldn't do anything right at all -- I'm definitely sold on Battlefront 2 after playing the beta.

I had a really great time in the 2 hours I put in, and that's saying a lot since it's just one map.

I found each of the character classes to be enjoyable. The Assault, Heavy, Officer, and Specialist all made sense to me while playing. I though their weapons felt good, shot well, and the upgrades made a different to my gameplay.

I enjoyed the map's objectives and the pacing of the battles, and they felt way better than Battlefront 1.

I think EA has a real winner here, and that's such a relief after how bad Battlefront 1 turned out.

You can play the Open Beta from October 6-9 to give it a try yourself.