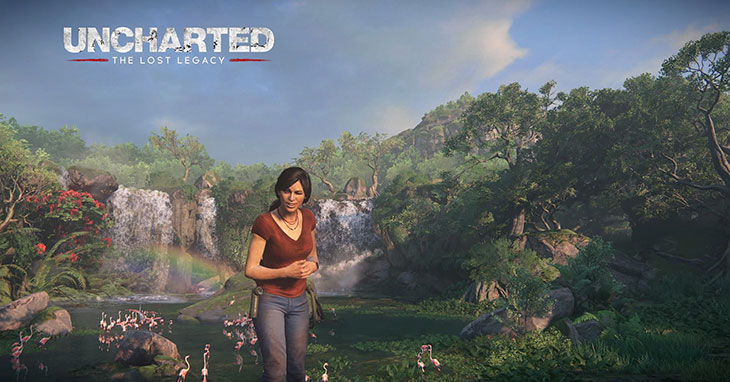 I'm a fan of the Uncharted series, so picking up The Lost Legacy wasn't really ever a difficult choice. The previous installments had the action-adventure mixture of gunplay, platforming, puzzle solving, and treasure hunting to hold my interest.

How does The Lost Legacy do without Nathan Drake at the leading character?

Pretty well, though his character and the story surrounding his family and friends is definitely missed. The Lost Legacy stars Chloe Frazer with a supporting role from Nadine Ross. Both characters are from the series' past entries, and both bring bring interesting stories.

While these two ladies do nicely as protagonists, they lack of the quips, whits, and charm of Drake and Sulli. There's also a lack of romance and "do anything to save you" 'feels' from Drake's wife.

Naughty Dog did a decent job making me care about Chloe's struggle with following in her father's foot steps to find the Tusk of Ganesh, but it lacked the depth I found in previous games.

The story itself will feel familiar. There's an ancient artifact (the tusk) that Chloe needs to find. With the help of her friends, they explore ancient ruins and cool sights while trying to stay one step ahead of an enemy seeking the game goal.

The Uncharted formula is followed pretty well in terms of story and execution.

A big part of what I enjoy in the Uncharted series is always the location. I loved the pirate theme brought by Nathan Drake, and the various locales his adventures took the team. In the Lost Legacy, the adventure takes place entirely in India, and mostly in the Western Ghats which are jungle-like mountains and home to the ancient Hoysala empire.

When not exploring outside and climbing cliffs, you'll be inside temple ruins and various places that will feel pretty much exactly like what you'd expect from an Uncharted game.

Naughty Dog introduced a neat feature that allowed Chloe to pull out her cell phone and take photos. There's also a selfie mode that I ended up never using except to take the featured image photo of this post. Dumb duck lips and winkie faces are present.

So generally speaking, it's identical to Uncharted: A Thief's End.

You'll be jumping across chasms, swinging from ropes, climbing like spider-man, and pulling off moves that are completely in-human and defy the laws of physics. So, yeah, Uncharted.

Gunplay and fighting feel great. I'm not a fan of the weapon diversity in this one, and feel the entire game was kind of one-note fighting. Though always satisfying to find a sniper rifle, I didn't feel like the gunplay was warranted almost the entirety of the game.

The Lost Legacy features a LOT more opportunity to play through entirely in stealth, which I did try to do whenever possible. Chloe pulls off quite a few awesome stealth take-downs when you give her the chance. But Uncharted games are no Assassin's Creed, and fighting with guns just feel par for the course. So when I wanted to shoot, I wish I had more opportunity and more weapon diversity.

Slight spoiler here, but the real boss fights were entirely hand to hand.

The cinematic feel of the gameplay is excellent. Yes, the game is linear. Yes, a lot of those "OMG" moments are scripted, but more than a few times I felt that sense of "WOAH that just happened and I was entirely in control!" If you play, I'm sure you'll share those same moment -- and not my chance.

Puzzles are actually really, really good in The Lost Legacy. I never had to resort to reading a guide to figure them out, but they still took me a deal of thought. Unlike trial and error puzzles, these ones had a way for you to suddenly discover what they're wanting you to do, and then they become easier to solve.

A big portion of the game takes place driving your jeep around an area with a tower in the center and temple ruins surrounding it. This area contains puzzles to solve, bad guys to take out, and treasures to find. More on this in the next section.

I always have to chuckle at the Uncharted formula. There are two main things that stand out in every Uncharted game, and The Lost Legacy is no exception. First, the ledges and places you have to go are always so ridiculously obvious. Oh look, perfectly climbable ledges everywhere! Second, the bad guys always manage to be one step ahead of you or right on your heels despite you having to pull off these insane feats to get there.

Overall the game had very satisfying mechanics and gameplay.

This is worth bringing up. The game is cheaper than a full-price title. I paid $39.99 on Amazon.

The entire game took me about 8 hours to complete, and I didn't spend any time going out of my way to find all of the collectibles -- I never do in any Uncharted game.

Previous Uncharted games have taken me 15-24 hours to complete and have many more locations and chapters. This is definitely on the shorter side, despite being sold as a "standalone expansion" to the series.

The area I mentioned where you drive a jeep around solving puzzles before gaining access to a temple is where the bulk of the game takes place. This surprised me, and I didn't realize it until I was on the last chapter that the game would be ending soon.

Although Uncharted: The Lost Legacy lacks the charm brought by previous Uncharted characters, it still provides a solid action-adventure experience. If you're a fan of the series, get it. You won't be disappointed, but you'll share my feelings about it not quite measuring up.