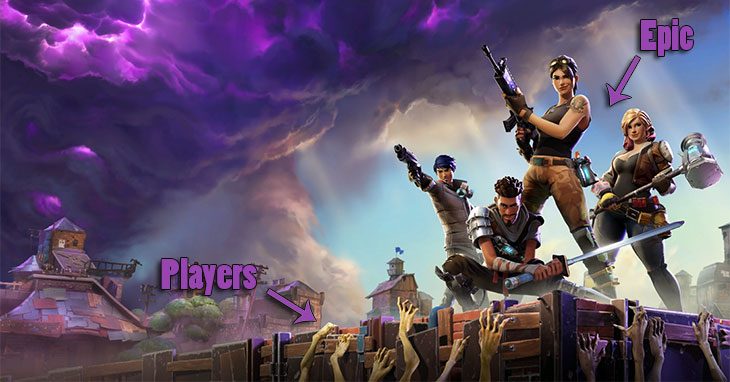 I want to cut to the chase in my review of Fortnite. It’s really boring. 🙁

I’m sad because I wanted it to be amazing. I saw a L4D meets Orcs Must Die! meets building game that just screamed of all kinds of things I love smashed into one. What I played was a hodgepodge of samey, F2P cash grabby, boringness.

You end up having to replay the exact same missions over and over to satisfy quests and progress. You’re stuck going through the same “survive this wave while X happens” and it breaks all immersion when you have to go back and grind it again to satisfy a new quest requirement.

Combat is way too samey. Every minute of gameplay feels like the last. And if the missions/quests were going to be so repetitive, the least they could have done is given us some variety of zombies or combat styles. It’s all “hold left click” gameplay.

Difficulty Isn’t Tuned Well at All

I’d spend 5 minutes decking out a little mini-base on a level to defend an atlas reactor just to realize I could stand right next to it with nothing built and completely wreck every enemy in sight. Never did I die or come close to death.

Base Defense is Self-Initiated

This goes to my gripe about the game being mission-based instead of open-world. I knew this going in, so I’m not complaining about missions. I guess I’m just complaining about the point of a base. Every so often a mission comes along where you have to defend your “main base” but that’s it. It’s — again — super easy and samey.

I feel like I spend more time stuck in menus being presented with cash shop offers than I do playing the game. There’s just too much cash shop here, and the game is clearly build to be monetized. There are literally loot pinatas, daily log-in bonuses, resource gathering over time, daily quests, exp boosters, multiple forms of exp, research points, and a collection book for dumping things into. I could go on guys, it’s intense.

Yes. I think building itself is really well executed. Had the rest of the game not bombed, the building would have been a great feature. In other words, take this building and put it into a game that doesn’t suck.

The visuals are also very nice. I like the stylized cartoony graphics which are almost a plants vs zombies take on Orcs Must Die!.

This is Why Fortnite is Not On Steam

We would refund. Quickly. And so would everyone else.

Fortnite starts out fun for the first few hours. But that’s about it once you experience everything the game has to offer and the rest takes over.

I can’t recommend Fortnite. As much as I wanted it to be great; As much as Graev and I would log in several times to try and give it another shot, we ended tonight’s play session with regret for having purchased the “EARLY ACCESS” to the game.