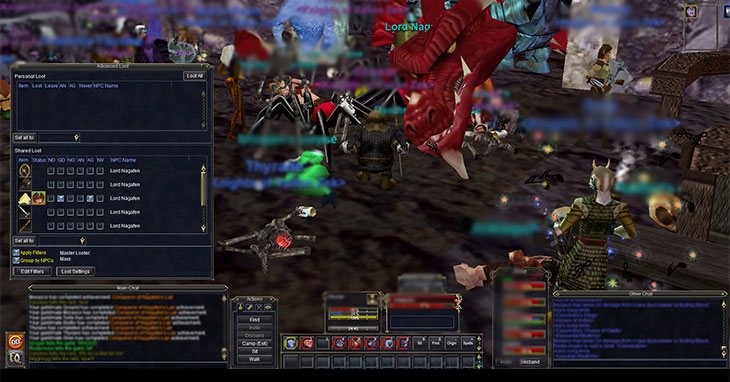 Loot is complex in multiplayer games. I myself waffle back and forth on this subject probably every year.

The big issue at hand is how much loot impacts more than what simply drops and whether you get it. Loot rules impact community, economy, progression rates, retention rates, and essentially the entire flow and dynamic of a multiplayer game.

I’ve been playing a lot of EverQuest lately. Almost all of the raids have to come up with a system of loot council or DKP (participation point system). That’s because the loot in EverQuest is shared across all characters. A free-for-all would be a bloodbath and ruin the fun. Sometimes even a straight DKP system makes for inefficient raid progression. People get all uppity and dramatic about loot.

Loot becomes something that binds people together because we’re all working to get that dragon to drop a pool of loot for us to divvy up. There’s something satisfying about seeing a really rare item drop for the group.

Shared loot tends to tie us together, for better or worse. It’s harder to leap into another raiding environment and immediately prosper. Long term, that may be in your interest but certainly not a weekly “go where it’s advantageous” occurrence.

Contrast that to a game like WoW. Everyone’s loot is individualized (I know this can be disabled for an arguably more efficient raid progression). I can go on a raid and whether or not the guy next to me gets gear really isn’t my concern. If the dice weren’t in my favor, I’m not going to be upset that a council didn’t give me something or that I missed loot because I wasn’t present for a raid when my spouse was sick.

I like knowing that the only person I’m competing against is the omnipotent RNGesus.

But there’s definitely a loss of community here. The focus shifts off the group’s accomplishment and onto the individual. As an individual I could go on anyone’s raid and the dice (or my fate) goes with me. I can choose to raid any any given moment with anyone. This is a HUGE problem in a game like WoW. Every time I’ve gone back and played, people I know bail and jump into a friend’s raid because that raid is doing something harder and they can benefit individually. It ruins guilds and strains friendships.

There’s something ‘immersive’ about a dragon dropping one really good item. There’s more to be said if only one version of the dragon spawns instead of being instanced, but even EverQuest has evolved out of that one. Personally, I’ve evolved out of it too. I’m hoping that I have come to terms with that realization. Part of me will always hold onto the old guard ways of wanting such immersion and realism, but it’s simply not fun.

Single drops often coincide with economy as well. In a game like EverQuest, a lot of those raid drops can be traded. And since they’re typically smaller in scale due to shared loot, it drives their value up significantly. I actually like knowing the items can enter the economy. I’m saddened when gear becomes so individualized that all we’re left to do is chuck epic dragon drops into our banks for the memories, or destroy them instead.

The Verdict: Which Loot Model Is Supreme?

I’m going to cheat a little.

I vote individual loot on raids. Ultimately it comes down to me liking the idea of no dkp or councils. I like the game choosing. It removes a lot of drama from that decision. Although it ads drama too, I think I’d love there to be a way for the game to know you’ve raided in the same group. See? I said I was going to cheat. That way people can’t raid hop. Though to be honest, if people weren’t such bastards it wouldn’t be necessary. If not for the bastards, I would vote individual loot 100% and never look back.

I still like EverQuest’s loot model for groups, though. Rolling for loot! Whether the group decides need before greed or everyone rolls and can do with it what they please, there’s something immensely satisfying about that model.

Or ultimately none of the above. See? Cheating again. Get rid of dropped loot entirely. Make MMORPGs like UO where the players craft the loot and it mostly doesn’t matter. Let the accomplishments matter for character progression, but not items. Keen gets more powerful because his character was present during the death of a dragon. Could make some sense.

Thoughts? What loot system do you prefer?