Mario Kart 8 Deluxe, an enhanced version of the last Mario Kart and 2014 version, released on the Nintendo Switch just over a week ago.

I'm sure you all know what Mario Kart games are like by now, but if not here's a quick video of two races my wife and I played on the 2p mode.

What I'll touch on here in this writeup are the new things introduced in the Deluxe version for the Switch. Smart Steering helps drivers stay on the track. In most cases, it actually works really, really well. You can almost drift to your heart's content, and as long as you're not drifting the wrong direction and purposefully forcing your kart off the track you'll do well.

The only time I found Smart Steering to be a nuisance was on levels like Toad's Toad's Turnpike. The "smart" steering freaks out around other cars, and actually prohibits you from going off the ramps on the back of some of the vehicles.â€‹

Overall, a great feature that I sometimes leave on because it can make the game more fun.â€‹

I like how all of the characters, including those released as DLC for the original MK8, are available from the start. The only unlocks come from collecting coins to unlock new karts, tires, etc.

The only real unlockable character might be Gold Mario for completing the cups, but he replaces Metal Mario.â€‹ In MK8 for Wii U, heavyweights were definitely skewed to be the best. MK8 Deluxe revamped the stats slightly so that heavier class racers don't have quite the same advantage they did for top-end speed, and baby class racers acceleration was fixed to provide more incentive to use them.

I believe there are something like 16 subclasses of racers now, which is up from the 13 from the Wii U. It all gets super 'meta' as you look at 0.25 stat differences between some racers within their own class.

I've lost track (no pun intended) of the various tracks from the games, particularly between MK8 and this new Deluxe version. I -think- there are no truly "new" tracks unless you count the Zelda and Animal Crossing DLC from Wii U -- I do since I never bought them.

The inklings bring their new karts which are cool.

The battle modes are much improved over MK8 with the revival of Balloon Battle, Renegade, and Bob-omb blast.  In total there are 5 ways to battle, so there's plenty to do.

While it sounds silly to celebrate 1080p and 60fps in 2017, it's pretty cool to finally have have them in true form on the Nintendo Switch.â€‹ Not much else to say there.

What keeps the game alive for me is how many ways I can play multiplayer. I can bring my Switch over to Graev's and we can play wirelessly. I can launch the online play and go head-to-head â€‹with players around the world in tournaments and battle modes. I can also just boot up local multiplayer and race with my wife.

Mario Kart 8 is probably my favorite game on the Switch so far. Strange that it beats Breath of the Wild, but I'm enjoying it a lot.

Mario Kart 8 Deluxe is definitely worth picking up for all Switch owners.â€‹ I truly can't think of anything negative to say at this point. I think they nailed it. 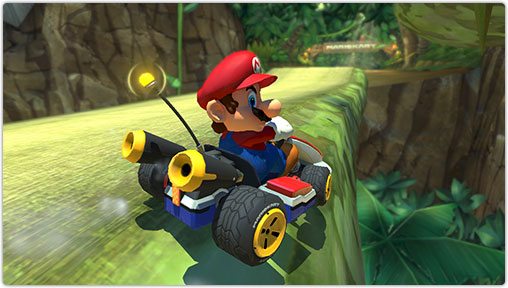