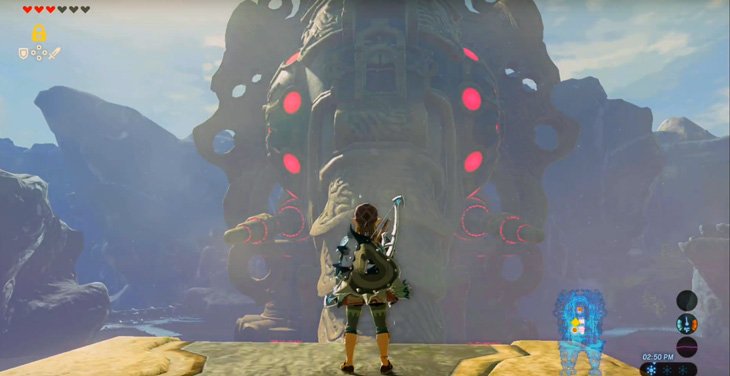 During the first four shrines, Link’s Sheikah Slate is empowered with Runes which grant game-defining abilities like bombs, magnesis, cryonis, and stasis. To best showcase how these are used, I made a quick video.

Shrines are like micro-dungeons. And when I say micro, I mean as short as a minute or maybe as long as 5 min. These experiences are mostly puzzles with the occasional “fight a bad guy” type. They typically reward junk items you’ll break moments later, but some will give significant game-changing upgrades like climbing armor or other gear that will last.

These Divine Beasts are the ‘dungeon’ equivalent. However, they depart from the formula significantly. There’s a dungeon map, but that’s it. No big key, small key, etc. There aren’t items you’ll obtain in them like you would a Hookshot, Boomerang, etc.Â They’re more like giant puzzles.

I recorded an entire Divine Beast (Vah Ruta) to show you guys what they’re like.

These Divine Beasts are a ~30-45 min experience.

The boss fights are really cool, and better than the typical Zelda dungeon boss. But other than that, the experience is very, very different. I keep saying ‘different’ because I don’t yet know if it’s a good or a bad thing.

Graev is leaning toward “they changed it too much.” I’m in the “I like the shorter ‘dungeons’ with emphasis on puzzles,” camp, but I too liked the formula. There wasn’t anything wrong with the way Zelda dungeons have always been.

The big winner for me has been the story and how these dungeons play into the bigger arch — more so than other Zelda games where the story was a tad bit nebulous.

I’m not done with the game yet, so these thoughts are just part of my bigger review with is forthcoming.