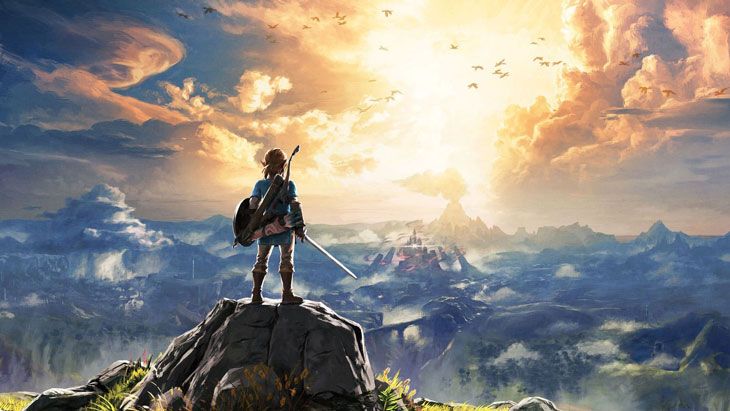 Breath of the Wild is such a massive game with so much to see, so much to do, and so much for me to talk about that I find myself daunted by the task of even beginning to talk about it with you. I truly do not know where to begin. So, at the recommendation of my wife, I’m going to simply start by telling you a little bit about what I love so about my journey into what has become a much larger game than I had imagined.

I’ve enjoyed the stories in the previous Zelda games, but something about this one feels more thought out. I’ve created a video containing the premise of the story which comes straight from the game itself.

I have my own theory about the world. Slight Spoilers ahead. We know it takes place one hundred years afterÂ Link wakes up. I think that’s a couple hundred years after Wind Waker.Â From what I can gather, I think Link from Wind Waker was long gone and another Link reincarnated, did his save the world thing, and THEN this Link came about. I could be totally wrong.

I kept telling myself, “It won’t be open like Skyrim. No way.” Â Turns out, it’s pretty dang close. Way closer than I was letting myself hope. You can pretty much go where you want and do what you want. There are main story quests you’re given, but it’s all up to you how quickly you do them or not.

There are side-quests and areas as well as ways to progress your character — or not. The choice is yours.

Weapons and armor exist in the game. You can find gear or quasi-craft it. You can upgrade it, sell it at merchants, etc.

The World is HUGE. Too Huge?

I MIGHT be 1/4 of the way through opening up the world and I am already thinking the world might even be too big. Traversing the world takes a really, really long time on foot and still a decent time on horseback. Oh yeah, there are horses. You can teleport across the world once you unlock points (again, Skyrim) but even then there’s so much you have to see and find.

Exploration is crucial, and finding things you wouldn’t otherwise encounter feels like half the fun so far.

Combat is Hard, Yet Intuitive

At first I was thinking that maybe the combat was just too hard. Then I got the hang of it and realized how it varies depending on your weapon. There are so many weapon types in the game but once you learn how they ‘feel’ you’ll be able to topple harder foes. There’s a nice rewarding feel to how combat is involved. Compared to previous Zelda games, I feel like it’s maybe a step up while still maintaining almost that same feel.

Going into snowy cold areas requires you to bundle up and stay warm. Going into a hot area requires you to stay cool. These are managed by food, elixirs, and even the clothing Link is wearing. It’s a nice touch.

My wife is constantly saying “There’s a cooking pot lets make some food!”

The cooking is so cool too. There’s way more than the surface level of simply combining ingredients. For example, taking a piece of meat and dropping it on the actual ground in a snowy area gives you frozen meat which you can then use for making heat-resistant foods. Taking and dropping it into a hot spring turns it into a hard-boiled egg. There are even benefits for cooking during a Blood Moon. Little things like that are so cool.

Even setting aside the subtle cool things you can do with food, combining food with recipes itself isn’t a bad thing. There are tons of recipes you can figure out and monsters are constantly dropping ingredients. I go out of my way to find new ways to combine food.

I’m overwhelmed. In a good way, really. I have to take Breath of the Wild bit by bit and just enjoy the journey. I can’t focus on being a completionist or rushing the story or doing ALL of the side-quests. I have to go through however feels natural. I don’t know that there’s much replayability like Skyrim would have because of making different characters and joining different factions, but this feels like a game that can easily continue on and build upon itself with DLC — which we already know it will.

I have multiple posts in the works for you guys where I break down some of the other things in more detail. Much more to come as I adventure on my quest to save Hyrule once again!