I’m having a lot of fun in WoW right now. I’m still in that “WTF is going on” phase where I’m still figuring out tradeskills, my spec, my gear, etc.

My spec is Survival, which has the toughest rotation I can remember playing in WoW. Bear tanking in WotLK was all swipes. Mage play in Cataclysm was nuke nuke dump. Shaman healing in Pandaria was literally casting the same 3 spells depending on how badly someone needed a heal. Survival Hunter is all about using cooldowns at opportune times and building stacks using abilities that increase my ability to use stacks. 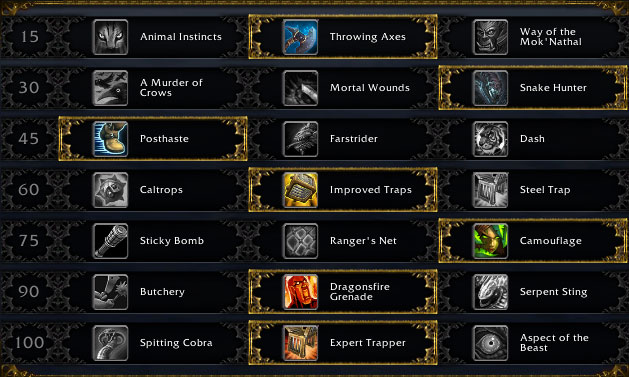 I’m both excited about playing something that’s challenging, and apprehensive about actually being able to do it.

I plan to provide as much useful WoW Hunter content as I can. I’d like to get back to the point where I’m actively contributing useful information, insight, and critiques for a class in a MMO. The launch of a new expansion to WoW could be a good opportunity for that.

Working on my Tradeskills for Legion

Engineering is awesome. I made a Gnomish Gravity Well. I can basically send myself up really high into the air with it, then use my Goblin Hanglider that I made to fly around. That’s going to be an awesome combo for Legion where I won’t have flying for a really long time.

KGC Guild is Up

We formed a guild (KGC) on Fenris, Alliance. We decided it would be nice to have a guild vs. being in someone else’s, and we’ll run the 5-man Mythic Dungeons which will get us gear that rival raiding until the highest tiers — which we will farm later.

If you want to join us for Legion, give me a shout. Alternatively you can join us on Discord where we have an active server with 6-10 people on nightly. We chat about WoW, form groups, and just have fun. It’s a great community.