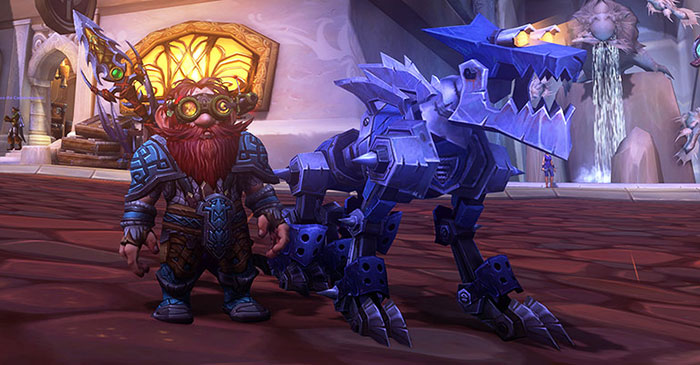 A few months ago, I posted about wanting to play an Orc Hunter because Rexxar. That’s when I first learned about melee hunters (survival spec) and the idea carried with it a certainÂ nostalgic flair. Â I could be an orc wielding a giant polearm with a great pet, but that was quickly overshadowed by the idea of a tinkering gnome with mechanic pets.

After turning my attention to gnomes, I began debating what tradeskills willÂ be best in Legion. Turns out, JC isn’t going to be the strongest after all. The JC gems are going to be BoE, and unique (1) which means anyone can use them. I’ll go Engineering and Mining. Engineering to craft awesome pets, Reavers, and gadgets; Mining to get the ore to do so and sell.

Then I recently found out about the really cool quests for Hunters. I think all classes (even professions) will have unique quests that send you to different places and have you solve puzzles. They remind me of the old school Rhok’delar quest. I was the first Hunter on my server, and I think in the top 5 in the world to do that quest. It was a huge deal. I was so proud of that accomplishment (still am), so the idea of having neat quests to do sits well with me. I’m a fan of the true ‘quest’ part of these quests.

One of these cool quests involves getting Friend the Mechano wolf from Gnomeregan (pictured at the top original source I think from EyeoftheBeast.com). Â Solve some puzzles, avoid being 1 shot, and you got him. Another quest involves the Siege of Orgrimmar and building your own Iron Juggernaut. They come in multiple colors and involve actually making the pet which is neat.

My Gnome Hunter plans include rolling a fresh level 1 Gnome on Fenris server right when the patch goes live. I’ll level him up to 60 Â using heirlooms and dungeon runs, then from 60-100 I’ll use my level boost. You couldn’t pay me to do 60-100 again on questing. I don’t have it in me. Using the level boost from 60-100 will raise my tradeskills instantly to the pre-Legion cap — another thing I wouldn’t want to do manually.

Decided on your class for Legion yet?