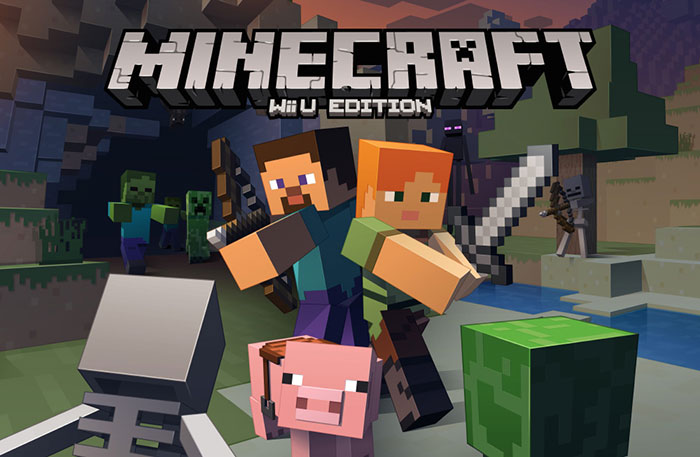 Graev and I picked up Minecraft for Wii U over the weekend along with the newly released Mario Mash-up pack. That pretty much explains where my entire weekend went. The digital version is available for $29.99 on the eShop, and the physical version comes out June 17.

As a veteran to Minecraft, I’ve played a lot of what the PC has to offer. Graev is a purist and refuses to touch mods — he wants nothing to do with them, and says if he wanted something more complex then he would go and play Space Engineers. I haven’t played basic MC in years. I love Feed the Beast, Sky Factory, Tekkit, and all of the mods bundled with them. Minecraft on the Wii U is about as vanilla as it gets, sitting around v1.6.4.

Getting used to Vanilla MC again took me a little bit. I struggled to cope with going from wood to stone to iron, and there being no copper or tin in between. The resources are a fraction of what’s available. Nevertheless, these aren’t things I feel that I should ding the game for since I went outside the game to mod my experience on my own. After a few hours, I finally started to come around to what was available and began to realize there’s still potential to “make cool things that do things” (which is what I like to do in Minecraft), they’ll just take a lot more imagination and be a lot rougher.

My biggest gripe about the game is the lack of gamepad utility. It’s simply a duplicate if what you see on the screen. Huge opportunity missed here for easier inventory management or even gameplay like tapping blocks and placing blocks.

We got multiplayer up and running flawlessly in seconds. Minecraft Wii U edition comes with several texture packs, including the Mario Mash-up one which transforms a lot of blocks into Mario-themed goodies. Sheeps are Koopa Troopas on all fours, Zombies are Koopa Troopas, chickens are Goombas, plants are the Mario plants, flint and steel are the fire flower, etc. The music is also swapped out for all Mario music. It’s a TON of fun. More to come on this version soon.

Lots of other DLC packs and texture packs from with the Wii U version, but there are plenty of other bits of DLC for sale. The Skyrim pack, for example, costs $3.99 and the Star Wars Rebels skin pack is like $2.99.

Last night my wife and I also started our own split-screen world together. She’s never played Minecraft, but quickly started getting the hang of how it works. The hardest part for her is managing the controller. Two sticks at once in a 3D environment was a first for her, but she’s getting the hang of it. We made a little base underground, started mining, and getting the basics all set up.

I’m trying to figure out how to stream from my couch which is across the room from my computer. I think I’ll jerry-rig the laptop to try and stream through my Avermedia Live Gamer Portable.Â Should hopefully work, and I’ll be able to stream my awful vanilla MC noobiness.

Overall, tons of fun. I think 10 hours was gone in a second. I definitely recommend it for people like myself who enjoy variations on a game like Minecraft and won’t baulk at buying a game you already own on PC in order to experience it differently on a console. And of course the kids will love it too. I also enjoy the Mario goodies on the new Mash-up, and highly recommendÂ you choose that texture pack when creating your world.

I’ll call this an early review, but I intend on showcasing the game more and talking more about the Mario texture pack once I have more experience with the game.