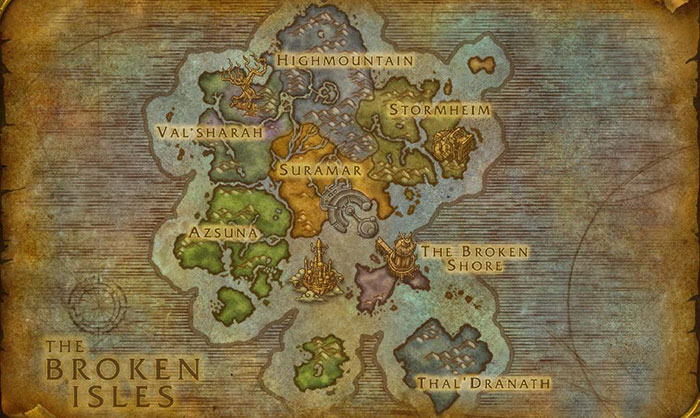 This isn’t new at all, but if you haven’t been following every Legion detail (like me) then you may find this to be some welcome information: World of Warcraft’s Legion expansion will feature zones that scale to your level.Â Monster levels, quests, and rewards will all scale based on the level you are in the zone.

This essentially means that instead of everyone progressing down one linear path throughout the entire expansion, players will be allowed to choose when they go to each zone.Â A few details still evade my understanding such as how this works for telling the narrative of the expansion. I know that when players reach level 110 they’ll be able to go to Suaramar which will present a cinematic experience — perhaps that’s where the more congruent story comes in?

I’m also curious to see how the scaling works, exactly. If I go to Azsuna at level 109, and my friend is level 101, will I be scaled down or will he be scaled up? I guess I don’t understand how we can tackle monsters together and have that experience scale up to me and down to him.

Though my mind is wracked with questions, I find the idea very inviting. I like freedom to go where I want, when I want, and to be able to group with friends more readily. I’m so ridiculously glad I won’t be on a PvP server, though. I can’t imagine having all of the higher levels ganking lowbies just because the zones scale and we’ll be forced more than ever to interact.

Do Levels Really Mean Anything?

The concept of zone scaling does once again bring into question why levels exist in WoW. The entire 1-110 experience will exist as what? A tedious activity designed to keep people paying subs longer? Leveling artifacts and iLvL are already end-game leveling curves anyway.

Although it’s truly too late to remove levels from WoW, I feel as though Legion inches us one step closer to their inevitable free max “level” expansions. After leveling two characters to 100 — I just hit 100 on my Monk last night — I’m pretty tired of the experience, and the idea of buying a level boost isn’t entirely out of the realm of possibilities for me moving forward. I don’t think I can stomach 60-100 ever again. I’ll put my prediction in writing here that we will eventually see progression become an “endgame” activity, and levels will be cleverly hidden behind items or other mechanics.