Lots of images — well, lots of the same image — are coming out of the Nexon developers conference showing the upcoming FFXI “reboot” for iOS. 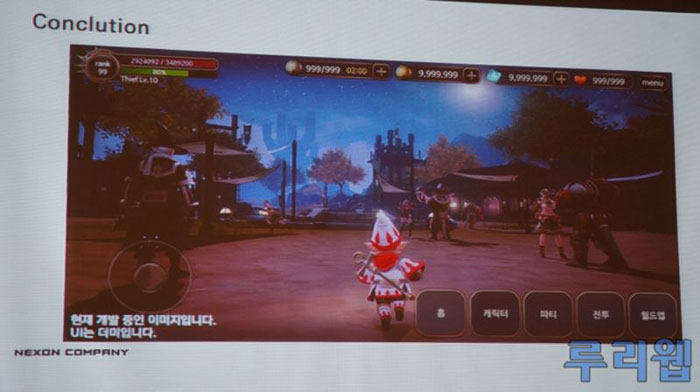 The idea of FFXI on mobile devices intrigues me for a few reasons.

I’m growing quite fond of my iPhone gaming. I play Clash Royale, Kingdom Hearts Unchained X, Yokai Watch Wibble Wobble, and plenty more mobile games daily. I have lots of time to play in short bursts of 3 minutes here and 10 minutes there. That’s why mobile gaming is so convenient for me. Mobile games are becoming more like games and less like gambling by offering whole gaming experiences. MMORPGs on mobile devices would definitely take things up a notch for me.

I think the first question I have to ask myself is whether or not I want to even play a MMORPG on a phone. I think my answer is yes, though when given the choice I’ll take PC over phone. But when I’m not at my PC, is FFXI a game I’d boot up? I think so. I recently returned to FFXI on Nasomi, and I enjoy the experience enough. Having that, or even better a rebooted version of that, experience on mobile could be great.

The very thought of FFXI on a mobile device at first sounds horrible, but then I think about the menu system already being more intuitive for clicking. Then there’s the idea of a “reboot” where this could be a much simplified version. Maybe 5 abilities usable at a time? Refined menu system? After that, the only barrier becomes proper chat support and I think they have something.

The business model will make it or break it for me. Nexon doesn’t have a great reputation for handling business models well. The currencies listed at the top of that first screenshot worry me. I’m not interested in a game where I pay to win or can’t do half the stuff F2P whales can do. I’d rather pay $10 and have the whole experience. Realistically my chances of that are nil. Will they have built in play-time limitations? Pay to win shops?

Lots of potential. FFXI is hopefully only the beginning of bigger things to come for mobile games. Never thought I would ever say that.