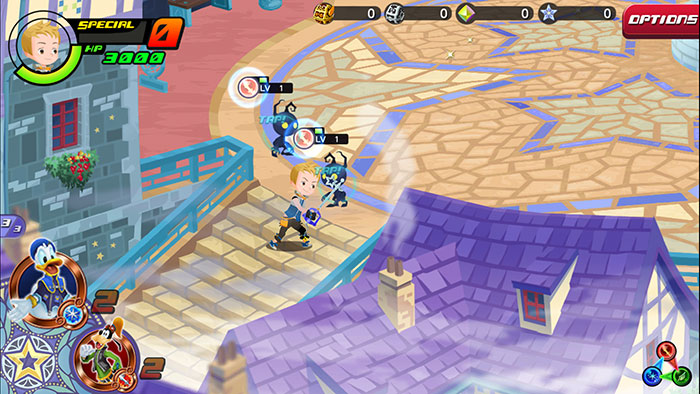 You are a Keyblade wielder — one of many — on a quest to rid the world of Darkness and fight with your Union over control of the remaining light.When you start the game you get to choose a Union. This Union is your faction of Keyblade wielders and each week your points are tallied to see which Union wins. There’s a neat multiplayer element to KH Unchained X where you get to fight raid bosses with members of your union, though it’s not truly playing with others in real time.

The presentation is in the form of a fairy tale. In the very beginning (while the game is downloading a good amount) you are presented a fairy tell in popup book format. Kairi’s Grandmother is telling her a favorite story from the past (the story you’re going to be playing) about how the whole thing got started.

KH Uchained X is free to play. The cash shop doesn’t appear to be too invasive. I’m not super far into the game by any means, but from what I can see it all appears to be cosmetic/”I want to be in the top 100 players” kind of stuff. It Â doesn’t appear necessary for the story gameplay at all. Medals can be purchased with in-game currency in a form of random packs, and I feel like the game gives you plenty of in-game currency to avoid needing to spend money.

Gameplay happens in “quests” or missions. So far they seem pretty quick, taking no more than a couple of minutes to complete. These missions involve a main objective like killing a particular encounter. Combat is handled well. Tap the screen to attack, swipe to area attack, and drag medals off of your Keyblade to use abilities. Combat in general is somewhat turn-based. Each action you take rotates the medals in your Keyblade. When the enemy’s action comes around, they take a move. So you’re trying to utilize your actions knowing that the enemy’s action is likely to come around soon.

Customization is pretty good too. You’ll get to slot the medals you want, customize our character’s looks/outfit, and level things up with a bit of choice as to what you combine. Overall, a decent system. It’s like a mix of Days and CoM.

Kingdom Hearts Unchained X comes across very well on mobile devices. The story telling methods they use work for both mobile and the KH narrative. There are plenty of familiar faces, lots of Disney which is great, and the feeling of Kingdom Hearts is all there. The price is right, and KHUx is one of the most ‘complete’ feeling mobile games I’ve played.