Yeah, I returned to WoW. I’ve put in a few hours casually over the last 4 days and have to say I’m starting to really, really enjoy the leveling experience in Warlords of Draenor. In fact, so much so that I am regretting having not played from the beginning. Technically it would have never worked given I was busy getting married, etc., but there is definitely a twinge of “Ugh I missed out on this in its heyday.”

This post is simply going to serve as a place to dump a few quick thoughts on my experience thus far, and maybe even get a little bit of your feedback and help on some questions.

I decided to roll up a Hunter. I plan to convert him to a melee spec Hunter when Legion launches. I’m enjoying how Hunters have changed since I played one as my Main from Vanilla through WotLK. Â Any advice on a particular pet?

I love the emphasis on lore and story. Right from the get-go we meet Khadgar and Durotan and really big players. So much early RTS lore being thrown at me. However, I’m sorta confused. So uh.. where’d Khadgar come from? Wasn’t he in Outland in Shattrath? And why does he have Atiesh, Greatstaff of the Guardian?! Isn’t that Medivh’s staff?

The Garrison system is fantastic. I think adding a place to call “home” is definitely a much needed change of pace from everyone roaming around a capital city. The feigned sense of social contact in WoW was off-putting. We were never there to chat. At best it made for inspecting peopleÂ and suffering from gear envy. Having a practical and useful place that generates items, income, and something to do — a reason to log in that isn’t the same kind of daily quest — is welcome. 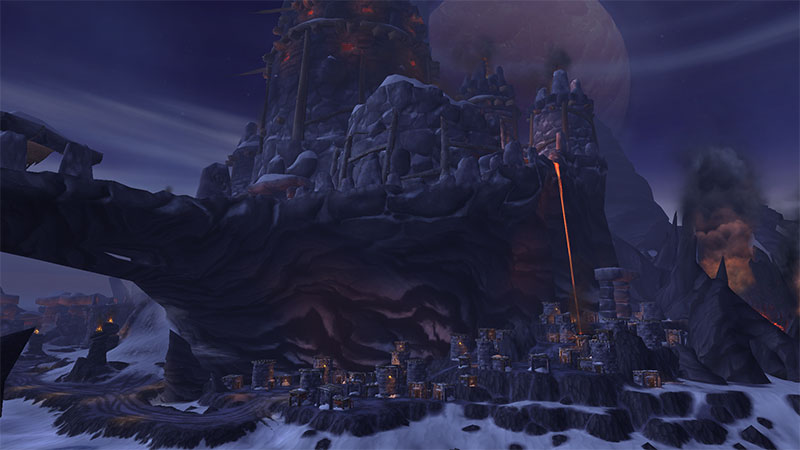 The zones themselves seem much grander than typical WoW expansions. MoP was so bland and the lore and atmosphere stank in comparison. I really feel a sense of “Warcraft” here.

Quests in Frostfire Ridge were quite good. I like the emphasis on cinematic and leading me around via story. On the main map there is a Story Progress indicator which is nice to see how far I should be progressing through a zone. Thus far, the story has taken me to all of the outposts and I feel like I finished everything I wanted to do in Frostfire Ridge by the time the story took me to the next zone.

[Spoiler ahead] When Ga’arn told his brother the tribe needed their Warchief and Durotan’s eyes widened… then Ga’arn sacrificed himself and yelled “LOK’TAR!!” I had the best nerdy goosebumps and was on the verge of getting emotional. Whew… starting to feel it again… okay, moving on.

Questing itself is definitely not bad. Yeah, it’s the same old stuff but man when you go to other games and do their quests and you come back to WoW it’s like a warm chocolate chip cookie giving you a hug. As far as themeparks go, WoW is king and no one else should even try.

One of my absolute favorite additions are the treasures and rare mobs/items around the map. I LOVE the exploration element that exists even when I cheat with this UI mod that shows me where everything is located. Personally, seeing these rares on the map is even more push for me to go out of my comfort zone. I also like how they can require a little effort and acrobatics.

REALLY cool feature I just discovered is random gear upgrades. I got a quest reward that I swear went from a green to an epic. I now have like 5 epics that are way better than the quest reward was going to be. Such a neat dynamic element to a very stale questing model.

I’m just now entering the second zone: Gorgrond. Setting up my outposts was yet another “cool, that’s neat,” moment. Those moments will keep me engaged and wanting to continue logging in to level.