I’m a huge fan of Disney. My wife and I just renewed our Disneyland annual passes, and I’m eager to start going again once this heat weave we’re experiencing is over. Somewhat on-topic for our blog, Disney just had their D23 Expo over the weekend and announced some incredible news for fans like us as well as for gaming fans.

I got chills when this was announced. An entire land at Disneyland (and Disney World) dedicated to Star Wars… it’s a dream come true. Star Tours the ride is already a must-ride for me every time we go. I spend at least 10-15 minutes in the Star Wars gift shop looking at all of the overpriced licensed goodies. Apparently the new Star Wars Land will have shops operated by difference species, and new major attractions featuring the Millenium Falcon and a “cinematic battle.” My fingers are crossed for blue milk at concession stands. I didn’t see an announced date, but I’m guessing 2017.

Disney Magic Kingdoms will be a Roller Coaster Tycoon style game where players can build their own Disney themepark. Starting with the iconic castle (which one I do not know, but I’m partial to Sleeping Beauty), players can place many of the rides and attractions from the parks including Haunted Mansion, California Screamin’, Astro Orbiter, and of course Space Mountain. 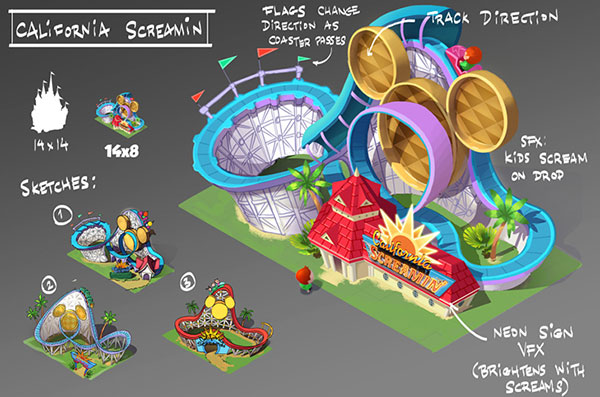 [/su_lightbox]I’m assuming Magic Kingdoms will be a time-waster game. I’m okay with that, and I trust Disney to carefully control the experience, especially since it involves their brand in such a huge way. I’m betting we’ll see expensive In-App Purchases — the likes of which I will never, ever, purchase but always work hard to hopefully try and earn them in-game.

Nothing beats Disney quality. Their apps are phenomenal. I’mÂ really excited to build the ultimate park, put Dole Whips on every corner, and pipe that sweet smell of cinnamon and sugar to every inch of the Keenland. Definitely putting this one on my must-watch list.