One of the more intriguing sides of the story in Unity is how the Templars and Assassins were trying to broker piece, and how such an act caused rifts within both organizations. How that plays out drives a great deal of story.

Unity tried to reinvigorate the city gameplay but fell a little flat. While the architecture and city layout was impressive, I quickly grew tired of climbing bell towers and constantly feeling like buildings are in my way rather than providing me with opportunities for enhancing my assassination gameplay.

Throughout the game I continually lost the feeling of being an assassin. This is mostly due to the fact that I never truly felt like Arno was properly brought into TheÂ Order. Â Assassin missions are a complete afterthought. You pick up a mission, run 100 yards, and stab a guy who is just walking in the crowd.

If Ubisoft continues making cities a major part of the game, and I think they are given Syndicate’s setting, then they have to come up with a way to innovate on the world. We need smarter crowd interaction for starters, and a return to more involved and integrated assassin missions.

Nostradamus missions provided a great riddle-solving feature for us. My wife loved trying to use her knowledge of French geography, architecture, and language to figure out what some of the puzzles meant. Solving them, like previous games’ major puzzle element, provides a huge boost to gear.

The main story missions in general are acceptable. I actually struggled a great deal during many of them, but found others to be overly simple. Some missions were very exploitable and allowed me to cheese a victory where I feel a little more stealth and finesse would provide a better experience. I really liked how side objectives during the mission often played into how I could go about completing objectives. For example, uncovering a cart of food would cause a riot of crowds running towards it which creates a great distraction to sneak into a building.

Combat was overhauled a bit to make it feel more like the fighting style of the setting: Fencing. Parrying correctly and timing it right makes the combat flow pretty well. Unfortunately, a lot was also taken out of the combat system to make this happen. In fact, combat felt almost annoying and I would avoid swordplay if at all possible due to how often the parry and reposte system would simply feel annoying.

New weapons like the Phantom Blade (crossbow) provide a similar experience to the blowgun from Black Flag. Additional great weapons like poison gas and firecracker lures are a nice addition. Lots of Armor and weapons were added to the game allowing players to customize all of the major components. Simply open a menu and buy a new item using in-game currency. Unlocking the ability to buy them came from missions. 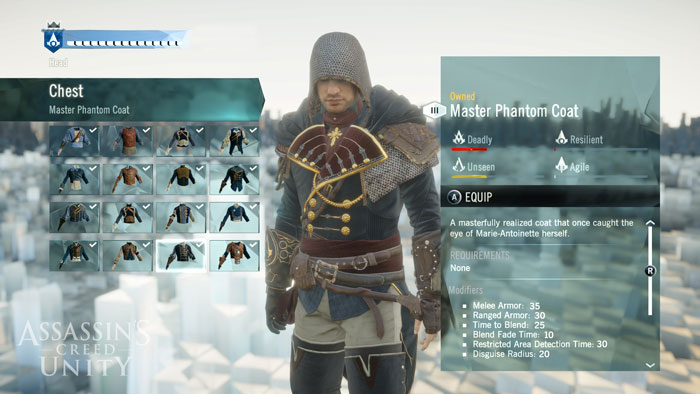 For the first time we are able to really customize skills via a skill tree of sorts. As Arnor levels up and completes sequences there are new abilities that can be purchased with points earned by acting really cool (assassinating someone in a cool way or completing a mission, etc). These abilities are your typical gain more health, stab two people at once, etc.. Gating such integral assassination abilities behind a skill tree was frustrating, but once unlocked teh entire skill unlocking system was forgettable and ultimately implemented without much thought to how it could tie into the actual game.

Ubisoft integrated a lot of cash shop purchases as well, but they are entirelyÂ forgettable and unnecessary.

A supposed big selling point for Unity was the integration of co-op and multiplayer. I have to say right off the bat that I feel this was unnecessary, and easily overlooked by almost all of the players. To participate in anything online requires going to the local social points and doing these separate missions. Granted, those missions aren’t bad — in fact quite good and probably closer to the assassin style gameplay — the execution is a bit off.

Normally I do not rate games based on graphics. I think games have evolved past such scrutiny. However, I need to mention issues when they arise that hinder my enjoyment of the game. The visuals are great and look fantastic. The performance side, however, was really, really bad on my PS4. I had constant — as in never went away — frame rate issues. On a console that’s unacceptable.

Assassin’s Creed Unity both innovates on and falls short of its predecessors.Â The gameplay is solid, but the presentationÂ is lackluster and the story lacks those nerd chill moments. Overall, Unity is a good game but only a mediocre addition to the Assassins’ Creed franchise. I definitely recommend fans of the franchise pick it up.