My gamer profile: Calm, Spontaneous, and Relaxed.That’s what I scored on the Quantic Foundry Gamer Motivation Profile survey. Seems to match up with how I personally view myself and my playstyle. Too much action and I get worn out, too much repetition and I get bored, and I prefer to avoid the intensity and just relax when I play. 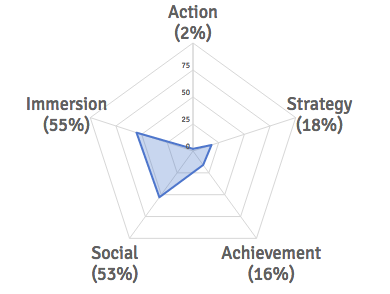 Really thinking about this being my motivation, is it any wonder that I am soÂ turned off by new MMOs? Every new MMO that comes out boasts some new intense raid or non-stop action. Blowing stuff up, constantly combat, no downtime, competitive PvP, repetitive leveling/endgame/everything, you name it and it conflicts with calm, spontaneous, and relaxed.

The relaxed virtual world is a thing of the past. The new worlds are all about constantly pushing players forward. Standing still is not something a new MMO can handle because players are treated like sharks and must keep moving otherwise they’ll die.

Players don’t “hang out” anymore. When someone is hanging out it’s because they are waiting in a queue to do something. Usually the idea of hanging out is seen as wasting time, and very undesirable. To be anything but active is considered a negative game experience, and something to avoid at all costs.

Some of my most memorable experiences in MMOs are the times when I was sitting in my house in Ultima Online crafting, or roaming caves and mining ore with my friends. I fondly remember the time I spent in Star Wars Galaxies as a musician and a dancer sitting in the cantina in Theed or being a chef and experimenting on different alcoholic beverages to find the right recipe that would sell to other players and make me millions.

Spontaneous is another beast altogether. If you think about it, being spontaneous in a modern/new MMO is almost an oxymoron. You’re told what to, how to do it, and how often it should be done. You’re put in lines to complete things, limited on how many times you can do those things, and told when it’s no longer necessary to repeat that process.

We talk a lot here about what MMOs have lost over the years. Add to the list the ability to create a world where players can be calm, relaxed, and spontaneous. Such traits are indeed (as seen in the chart) indicative of a social and immersive game — the very type of experience we lack. There might be a recipe for success somewhere in figuring out how to bring those traits back.