I watched Bethesda’s E3 Showcase last night to see whether or not I would want to be interested in Fallout 4. I will happily admit that I have never been into the Fallout series. Each new Fallout game I look to see if something unique or interesting presents itself, and then decide whether or not I’m going to finally jump on-board.

My reason for disliking Fallout has never too focused around the game mechanics. I think the open-world setting is pretty good. The conversation options are lacking, but the stories (as loose as they can be) are decent. What I really dislike is the post-apocalyptic world. I don’t like the brownish orangish grayish tint on everything. I don’t like wastelands or modern/post-modern weapons and gadgets when they’re combined with a wasteland environment and motif. That’s all on me, and entirely subjective.

Watching the video during the E3 Showcase, I will admit the world looked a little bit better… although still that post-apoc wasteland. There does seem to be a little more color infused into the world. I was digging that. Right when I was starting to think, “Hey this doesn’t look so bad,” I saw what probably would keep me away: The wacky/zany craziness of wearing ridiculous outfits and using downright unforgivably stupid weapons. I think I saw a bazooka shoot teddybears that made enemy’sÂ heads explode. I’m done. 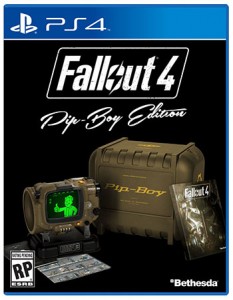 Graev already Pre-ordered at Best Buy, and I got one of their available pre-orders ofÂ Fallout 4: Pip-Boy EditionÂ on Amazon. It comes with a Pip-Boy that will hold your phone and several other “collector’s edition” items. Bethesda is going all out and creating an app to accompany the game. I don’t know if I’ll end up getting it or not, but I have the pre-order reserved and Amazon won’t charge me until it ships. Might as well hold on and make my decision later.

The biggest news of the night was that Fallout 4 will be available on November 10 of this year (2015) which is crazy fast.

Bethesda also announced that right after the show a new game would be available for iOS and Andoird: Fallout Shelter. It’s one of those time wasting games where you build stations to collect resources and keep people happy. It’s Freemium, so you can download and wait for things or spend real money on lunch boxes which contain cards that will give your shelter benefits. 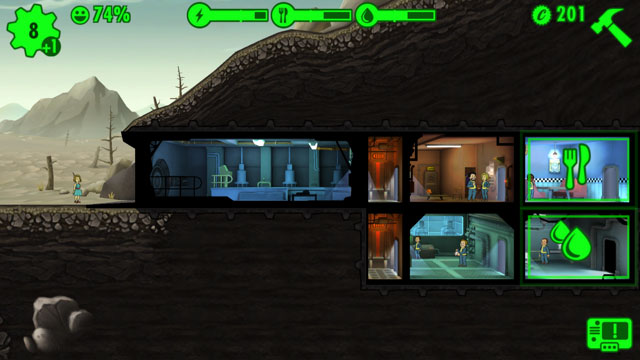 I’ve just started playing and find it enjoyable enough to log in once or twice a day during breaks at work to check on my shelter, but it’s nothing I’ll spend money on just yet. I’ll write up more formal tidbits about the game later this week or next.