I’m pleased to present Episode 2 of our D&D adventures! We took several weeks off due to holidays, sickness, etc., but it was worth the wait. This recap is brought to you by Yotor the Dungeon Master.

** The following may contain spoilers ** 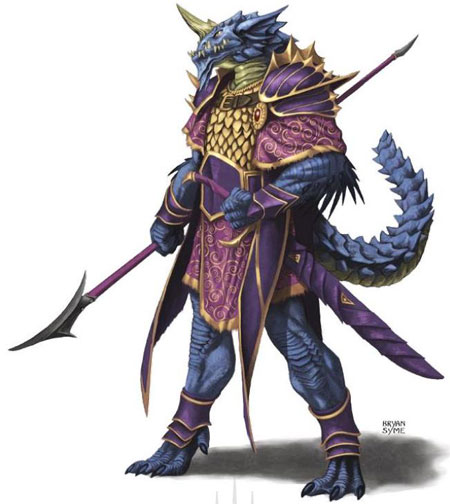 When last we left our heroes they had charged into the sieged town of Greenest. Battling their way to the towns keep saving a family along the way the adventures were greeted by a wounded Governor Nighthill.

With the keep thoroughly under siege by mercenaries and a dragon,Â Governor Nighthill asked our heroes to open a secret tunnel seldom used as a way for more families to get into the keep. While into the basement and through the locked door was bypassed easily by Ash, the sewer grate proved challenge and his lock-picks broke in the rusty gate. Ursus heaved and smashed the gate-lock allowing for our heroes to open the gate but not without drawing some attention and causing an ambush. While our heroes were gallantly fighting back more kobolds and raiders, several swarms of rats were also on the prowl within the creek bed. The fight was bloody and hard but our heroes soldiered through with considerable cuts and bruises and were even able to take a prisoner. Once the secret tunnel for the keep was clear our heroes returned to the keep only to find a new threat. The raiders have broken into the keep!

Our heroes return to chaos as guards and raiders fight under the start of soft rain drops. Castellan Escobert, the head guard for Greenest,Â yells at our heroes for aid to close the sally port that has been broken in. Rushing to the courtyard our heroes face the first of the true Cult of the Dragon. A man with red embroiderer dragon tunic and mantle attacked our heroes flanked by Kobolds and large Lizard no smaller than six feet in size. Ursus charged forward smashing with his warhammer. Nerubia the Drow cleric of Lathander drew upon radiant light to burn his foes. This cultist hurled magical enchantments demanding servitude of our heroes to the great dragon god Tiamat, but our heroes wills are strong. Above a roar of the dragon causes the keep to shake. After several insults were hurled by Keen the Bard, and arrows fired by Ash our heroes cleared the courtyard and smashed the robed acolyte to unconsciousness. Rushing to the doors that were smashed in beyond a new group of even more raiders were about to come through when some quick thinking and a fire illusion was cast to buy time for our heroes to fix the broken gate.

After fixing the broken gate our heroes were given a moment of rest and started to interrogate the prisoners collected and we get our first glimpse of the a leader of the raid on Greenest.Â  Frulam Mondath is seen wearing all purple leading a hefty guard, at her right hand a half-dragon named Langdedrosa Cyanwrath. Greenest is being attacked by mercenaries and cultists from the Cult of the Dragon. A blast of thunder again shakes the keep, and now a scream comes from the keeps roof, DRAGON!. 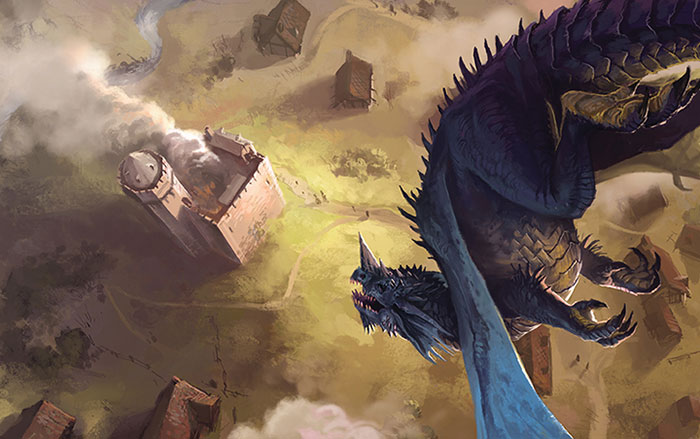 A roar as our heroes ascend, and coming into the rain soaked apex of the keep our heroes are greeted by an adult blue dragon. Its rain soaked scales glisten against the flames from the town bellow. Guards fire arrows at the beast as it bears down on them. Our heroes attack back, but with a sweeping breath no less than a half dozen brave Greenest guards are gone in a crackle as lightning sears through their bodies leaving nothing but charred bones behind.Â  Keen the Bard seeming to remember a legend about a great gnomish dragon tamer attempts to recreate the ancient text but to no avail, and settles for calling the dragon’s horde ‘small’. A stinging insult that brings the beast’s ire. A single swipe leaves our small Keen in a bloody heap several yards from where he stood. Unconscious, the little gnome is loosing blood fast. Seeing his companion fall Ash draws his bow and fires a shot that would have felled smaller beasts, which drives the dragon into the clouds and saved many lives that night.

Keen lying dying is tended by Nerubia soft white light closing gushing wounds, and Keen is roused from his death bed. Taking a few moments to recover from the battle, Govener Nighthill scrounges several healing potions, but the night is long and full of terror.

A teenager rushes to governor Nighthill and our Heroes and yells that the temple of Chauntea is under attack and the raiders have started to bash through the doors. Our heroes race off through the secret entrance to save the last group of townsfolk. The rain has started to come down now and the smoke is thick along the ground which provides much relief to our heroes as the stealthy approach the church. Seeing an opportunity with a side entranceÂ  Keen the bard uses a spell “thunderwave” to clear a path, combined with quick calm thinking our heroes are able to save those trapped in the church without much difficulty and return to keep to ride out the rest of the night.

From the darkness, a creature strides into the dim light of the dying fires around the keep. Although it is shaped roughly like a human, it is atleast seven feet tall, its skin is covered in blue scales, its fingers bear wicked claws, and its face has the muzzle and reptilian eyes of a dragon. The creature stops about eighty yards from the main gate of the keep and scans the walls. A line of kobolds fans out behind it. With their spears, the prod four human prisoners into the dim light: a woman, a teenage boy in a blood-soaked tunic, and two children. The half-dragon hails the keep, “Defenders of Greenest! This has been a successful night, and I am feeling generous. Do you see these four pitiful, useless prisoners? We have no need for them, so I will trade them back to you. Send out your best warrior to fight me, and you can have these four in exchange.”

Without hesitation Ursus stands, gathers his shield and war hammer and marches to the front gate. The doors open and Ursus the Dwarven Paladin strides forward casting aside his shield and war-hammer drawing a two handed maul. The half-dragon Cyanwrath draws a large great-sword with his clawed scaly hands, and the dance and strikes begin. Ursus deftly dodging the great sword, surefooted he lands several strong hits into the half-dragon. Then the half-dragon opens its mouth and breaths a gout of lightning into the center mass of Ursus, the blast sends him a clean eight feet back and lands on his back in the mud. Cyanwrath laughs, as Ursus does not stand, and then true to his word releases the prisoners.

Will Ursus make it? What will happen to Greenest? What of Cyanwrath and Frulam Mondath? Who is this cult?

Find out next time!