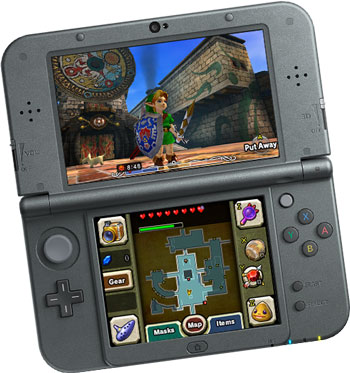 I’m 1/10th the enthusiast that Graev is whenÂ it comes to handheld systems. We both got the 3DS when it very first launched and became ambassadors (received the spiffy badge and free games) for supporting their somewhat rocky launch.

When the 3DS took off and launched the ‘XL’ version, then several more versions of the XL, Graev would get them and pass down his systems to me and I would fiddle around in a Pokemon game every now and again. When the New Nintendo 3DS XL came out, boasting so many new features, IÂ decided I wanted one.

My family gotÂ me the New Nintendo 3DS XL as a belated birthday present, and thanks to Graev tossed in Monster Hunter 4 Ultimate to go along with it. I’ll talk on MH4U but first let me talk up a few of the things I like about the new system.

If you’re like me and unable to hold still, you probably noticed that the 3D was finicky on the original 3DS. Moving your head to the side or not holding the 3DS at just the right angle made viewing the 3D effects difficult. The New 3DSÂ includes a form of eye tracking that knows where your eyes are at and adapts to follow them when you move your face or the system around. I know it tracks my eyes because when I look a way then look back it wigs out for a second to find my eyes again. So as long as you don’t turn your head and look away completely, this thing keeps you engaged in the experience. 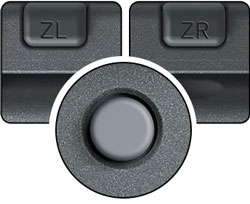 A couple of new controls were added like two new shoulder buttons, but the real star here is the C stick. The C stick is that little nubbin you see just above the X button. It barely moves but is made of a rubbery type feel that is sensitive to how your thumb pushes in directions. The only C stick implementation I’ve played with so far is in Monster Hunter, but that ability to control the camera alone has proven immensely useful for someone like me who has always struggled with handheld systems and the lack of ‘freedom’ of movement. Works great!

Overall the system is nice a big, feels good in my hands, and runs faster thanksÂ to a better CPU. The browser on this thing feels better to me and navigates well. I think the camera was also improved to no longer be so dark and grainy. I haven’t played with the Amiibo support or anything but it has that. I plan to give the wireless file transfer stuff a try later to see how easy it is to take stuff from the micro sd card and transfer it over the wifi network straight to my PC. OH! I should also mention that exclusive games are coming to the New 3DS XL that will take advantage of not only the controls but the new upgraded speeds, so they will look even better.

I have never been a Monster Hunter fan. I was always intimidated by what felt like massive barriers to entry and learning curves. There is so much that goes into such a simple premise of hunting monsters. Choosing weapon and armor types, crafting, upgrading, massive amounts of collecting, tons of strategic positioning during fights… it’s intense.

Much of that has changed now that I’ve hunkered down and put about 8 hours into the game. I’m starting to realize MH isn’t as incomprehensible as I thought. Still massive and overwhelming? Yes. If I stop and think about how insignificant I am compared to other people like Graev who have put in 100 hours already and could play another 200 hours easily… yep I could give up now. But I don’t. I focus on me and I go kill monsters.

For those who are completely unaware, here’s the gist of the game. You’re a monster hunter (the story is pretty simple and forgettable). You have a basic city/hub where you get quests, craft, etc. When you’re ready to go out on a quest you depart from the hub and you’re transported to a ‘map’ of ‘screens’ or ‘sections’ containing monsters. You’ll have lots of ‘trash’ monsters to kill as you make your way to objectives. You can harvest monsters you kill, big and small, for their resources which is essentially the entire point of the game: Kill monsters, harvest resources, make better stuff. You can mine nodes too for metals and gems, harvest plants, bugs, fish, etc. When done, you’re teleported back to the hub.

I’m having fun. I’ve even played multiplayer co-op with Graev! From the break room at work on my lunch I log in and Graev and I can connect to each other and slay monsters together. That’s an AWESOME feature for handheld systems, and it supports like 4 or 5 people all playing together hunting big monsters — yep, that’s pretty sweet.

I’m still a newb. I’m actually still trying to figure out which weapon I want to use. I thought I decided on the Chargeblade, but something about it just doesn’t fit my play-style. I’ve slayed lots of monsters already, gone on plenty of quests, and I’m crafting armor sets. This game brings out the min-maxer in me already by making me want to go online and read message boards to find the best combination of armor sets for my weapon type. Kinda fun, but kinda stressful.

Maybe the biggest downside to Monster Hunter 4 Ultimate, and MH games in general, is the time investment. Don’t get me wrong, you can have tons of fun like I am from the start, but to really get far it’s going to take you easily 30+ hours. That’s realistically no bad, but for a handheld system it’ll be the most I’ve ever put into a game except for Pokemon.

Should you get Monster Hunter 4 Ultimate? Yes. Get it. It’s awesome. Just be ready for a learning curve and expect to invest some time. It’s a game that will last.