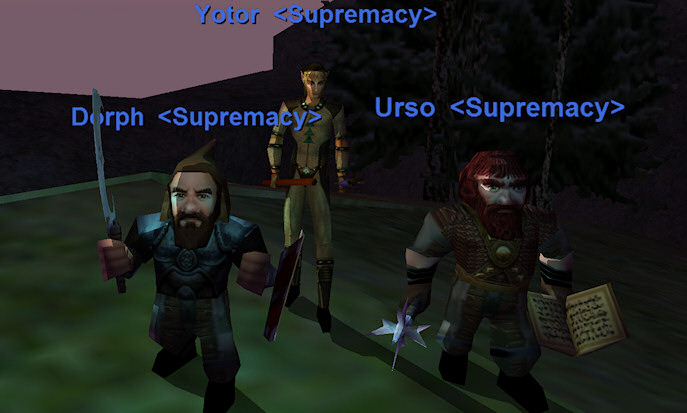 Don’t tell me to kill 10 orcs. Build me a world where I will want to.

That’s the overall theme for this morning’s blog entry. I started thinking about this yesterday while reading the great replies I received inÂ my discussion of ‘How much story is too much?‘ One reply in particular resonated with me.

Early EQ had perfect story pieces and lore scattered about without hitting you over the head with it in text boxes and shiny quest markers. You knew that the elves in the Faydark were at war with the orcs in their own backyard and those orcs were bold enough to venture into elven territory just by what was going on in the zone. – Gringar

That got me thinking about why I went out and killed monsters in EverQuest, and the type of ‘hunting’ I like(d) to do in MMORPGs. Orcs in Faydark are a great example. As Gringar pointed out, it felt like the orcs were at war with the elves as there was the general feel of conflict. Since monsters, particular orcs in the Crushbone area, could be quite difficult for newer players, they were always ‘training’ or running them back to the guards for protection. This created a general overall sense of there being orcs in the zone to kill, but it wasn’t my personal reason.

I killed orcs because they were a great source of experience. Killing orcs was incredibly efficient. They spawned in camps regularly, dropped decent loot, and had a great modifier if you managed to kill them inside of Crushbone. Finding a group to kill orcs was usually reliable, and as a result I always felt like I could see the progress I made while playing when I killed orcs.

No one had to tell me to go kill orcs. I didn’t receive a quest (though later I did find a question to turn in their belts for increased experience) and no one had to tell me the story about why the orcs hate the elves (to this day I still do not know). All I knew was there were orcs, they were a good challenge and yielded lots of experience.

It’s really that simple. I killed orcs because I wanted to. I had the choice of killing any number of things. I could have gone to several other zones and killed other kinds of monsters but these were located close to a Â city and provided the experience I was looking for while leveling up from levels 5-12.

Opportunity and means are huge in MMORPGs. We so often rely on quest dialogÂ to say, “go kill me some orcs and bring back 10 of their axes.” When completed we move on. What if we wanted to keep killing orcs? What if the process of hunting orcs was something more enjoyable — a process increased over multiple days or even weeks if we so choose. What if people could form groups to continually hunt orcs? That kind of free thinking puts us right back in 1999 — and it worked.

So I return to my original statement. Build me a world where I will want to go kill orcs and spiders and skeletons. Don’t build me a world where I have to be told every second of every day what to do and where or how to do it. Let me explore and find a graveyard with skeletons, start killing them, and realize the experience is amazing and their bone chips can be traded to other players. Let me have the freedom to come back tomorrow and pick up where I left off. Give me the opportunityÂ to do so by setting me free instead of pigeonholing me into following an arrow to the quest objective.