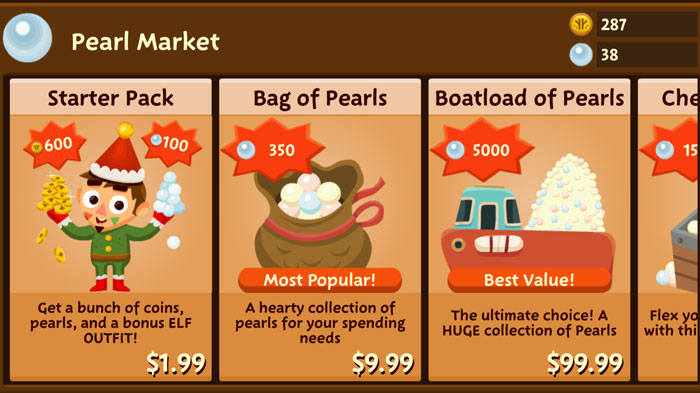 I’m playing a lot of mobile games these days now that I have an iPhone 6 Plus. Playing on the iPhone 6 Plus screen is way more fun than the iPhone 4. I can actually see stuff and my fingers aren’t blocking 40% of the screen. I’m not really a “mobile gamer” though, so I’m not inclined to spend more than $0.99 on an app, and even then I won’t buy ones that aren’t on a huge sale and critically acclaimed – Terraria for $0.99 today, for example.

The apps I tend to play are “freemium” which means they have In-App purchases (IAP). The IAP are generally the same type of thing you’d expect from a F2P game like League of Legends, or something a little more insidious like the type of model found in a F2P MMO. The worst of the lot are the IAPs tied to the “waiting game.” Freemium apps are notorious for being timer games where the main gameplay element is actually just waiting for time to pass. Token, Pearls, Doodads, or whatever the in-game currency for that particular app can be earned in-game at a tauntingly slow pace (only there to make put you in pain) or bought from the store. Spend the premium currency and the timers speed up.

Mobile games, the games meant to be ‘on the go and quick’ end up being slow and tedious upkeep games. It’s this weird juxtaposition of time and convenience, and that’s what makes mobile gamers the perfect prey for this type of business model. In order to keep a game that should be quick and convenient actually quick and convenient, money has to be spent.

IAPs have become a license to make bad design decisions or in many games entirely bad games.Â Games that would be AMAZING — even better than so many PC/Console games — are destroyed by IAPs having to dictate design direction. It’s sad because had the game simply been sold for $5 or $10 or heck even $20 I would have happily bought the game rather than feel like I have to be nickeled and dimed (many times to extreme sums of $$$) just to find the level of enjoyment I could have byÂ paying the initial cost.

I truly believe we are entering an era where mobile devices are capable of providing as-good or better gaming experiences. For that to happen these games can not continue to exist predominantly as IAP waiting games.