The cinematic for World of Warcraft: Warlords of Draenor was revealed yesterday proving once again that Blizzard is the king of both cinematics and hype. 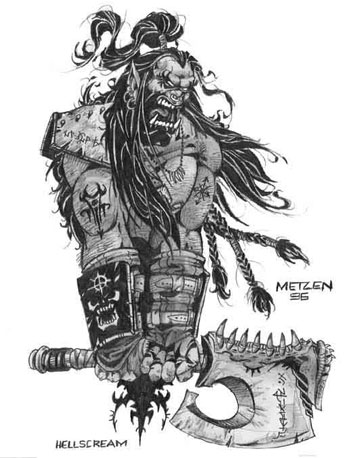 Wow!Â [pun intended] My mind was racing with possibilities after watching. Grommash (Grom) Hellscream was supposed to drink Mannoroth’s blood and bind the Orcish Horde to the Burning Legion. However, it appears to that Garrosh (son of Grom) was able to escape prison and travel back in time to alter events. With Mannoroth dead and the orcs bound to no one, Grom can become warchief of a united orcish horde under the Iron Horde banner.

In a perfect world, this concept could completely wipe out everything we learned from Warcraft 3 and World of Warcraft. Â The thought sends nerd chills down my spine! This could be an opportunity to undo many bizarre choices and almost deus ex machina the entire series back to a point where we can have an amazing RTS series again with a story much truer to the heartÂ of Warcraft.

Unfortunately, I think the plan is for Grom and Garrosh to go through the Dark Portal (seen at the end of the cinematic) and invade the MODERN day Azeroth rather than the Azeroth of their time. So technically, this wasn’t a time travel event as much as an alternate dimensionÂ or parallel universe.Â What a horribly wasted opportunity! I want to see an Azeroth where the Iron Horde’s technology (The Kor’kron Iron Star (spinny ball of death thingy)) allows them to conquer most of the Azeroth prior to the events of WC3 and how the world there adapts. Sounds like a great RTS to me.

I consider myself a fan of Warcraft. I don’t like where WoW took (and is taking) the lore, and I’m not a fan of the MMO side anymore, but I’m still an avid fan of the franchise.Â Hopefully the coming events allow Blizzard to make a darker, grittier, Warcraft focusing less on the touchy-feely-cutesie stuff and more of orcs pillaging and conquering once again! Â Warcraft: Orcs & Azeroth! I want to see Warcraft return to itsÂ roots.