Rogue Legacy came out on PC a year or so ago but just recently made its way to consoles. Despite being an avid fan of roguelikes and rogue”lites”Â I never got around to playing the PC version. Recently we were able to get a review code from Cellar Door Games for the Playstation version of the game and I have been playing it non-stop ever since.

What kind of game is Rogue Legacy?

Rogue Legacy plays like an action platformer with roguelike elements. However, I also get a major MetroidVania vibe due to how the map and game levels are laid out. Not only that but the enemy types and variety along with the character combat remind me a lot of 2D Castlevania games. Your character runs around a castle setting fighting off skeletons, armored knights, floating eyeballs and skulls, elemental wizard guys, etc. Your main weapon is a sword which you can swing with but you also can do a downward thrust attack Scrooge McDuck Style, though you only bounce off of enemies and only slightly. You also get a secondary attack in the form of a spell like an arcing axe or throwing daggers. Like I said, very reminiscent of Castlevania sub-weapons. There’s also a very heavy emphasis on platforming elements and while you are making your way through the game you will have to avoid hazards like spikes, turrets, and fireballs as you make your way through corridors and between platforms. 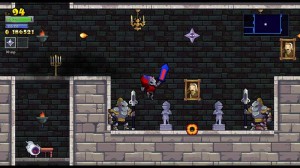 What are the roguelike aspects?

Whenever your character dies in Rogue Legacy (and you will die a lot) you take over as one of your descendants. You get a choice between three characters with different random configurations. There are several character classes in Rogue Legacy and they all have different strengths and weaknesses along with a special ability that can be unlocked. Your choice of character can also come with a variety of different and interesting traits. Some of these are just fun and offer cosmetic changes, like Color-Blind which makes everything black and white or I.B.S which makes you fart occasionally. Some of the traits can actually be beneficial like O.C.D. which lets you gain mana by breaking environmental objects. Gigantism increases your sprite size but also increases your swing range while conversely dwarfism makes you really small and shortens your range but lets you access a lot of secret areas. However a lot of the traits can be just awful and really impact how you play, like with Vertigo, Far-sighted, and Near-sighted.

Your progress in the castle and adjoining areas will be reset and randomized upon your death, aside from major bosses which stay dead. Fortunately there are lots of things you can do with all the gold you find stashed away. You do retain all of your gold upon death and in your next life you can use it to put points into a skill tree of sorts. There’s a lot of passive abilities that increase your hp, mana, and stats but some unlock access to new classes, class abilities, and merchants. Once you have a blacksmith you can use your gold to buy new equipment, provided you find the blueprints for the gear in the castle. The Enchantress can give you up to five different bonuses depending on the runes you find within the castle. These can increase your speed, how much gold you earn, give you double jump, let you fly for a short while, etc. If you double up on runes it actually increases the effect so if you equip two of the jump runes (or whatever it’s called) you can actually jump two additional times mid-air. The last merchant is the architect and he will keep the previous castle layout but you will only get 60% of the loot inside. It also lets you teleport to and retry bosses.

Rogue Legacy is essentially everything I want in a game like this. Great art style and music, fast-paced and difficult action, and gameplay mechanics that keep me playing for hours on end. The PSN version of the game is also cross-buy and cross-save compatible. In fact, Rogue Legacy has the best cross-save that I’ve seen of any game yet. Your saves are automatically synced (but it can be done manually) and it’s really easy to jump between platforms. I’m spent quite a few hours with the Vita version and it is just as good as the console counterpart. So if you have a PS3/PS4/Vita or any combination of them you should really consider checking this game out. Or if you don’t then it’s always available on PC but I’d recommend you play with a controller since I imagine trying to play this with a keyboard would be a nightmare. Anyway, for what it is I find Rogue Legacy pretty perfect or at least as close as you can get in this kind of game.