Today’s post came to me while I was browsing game art for EverQuest Next. Â I noticed a picture of a dragon–I like dragons so I clicked on it. Â Upon seeing the various types of dragon-like monsters, I was originally thinking that I might simply write about my favorite type of dragon. Â Massive dragons are AWESOME to fight in a MMORPG. Â I started thinking about which of the dragons in this image would best match my favorite type (easy to choose, it’s the big one with wings and spikes) when I realized my answer: All of them. 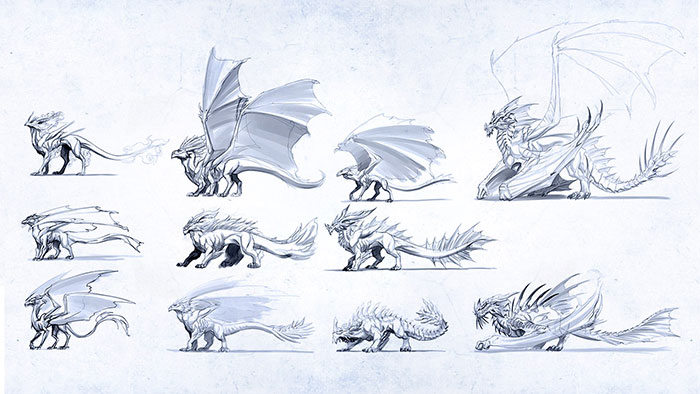 Mob/Monster diversity is sorely lacking in modern MMOs. Â Worst of all is the lack of monster types. Â Now’days we fight humanoids and animals resembling common mammals. We fight the same monsters with different skins over, and over, and over. Â When they really want to change things up they make the bigger or smaller. Â I want TONS of different TYPES of monsters, but I also want tons of diversity beyond just skins.

I want entirely different types, animations, abilities, dangers, dynamics, etc. Â I want some dragons in the sky, others burrowing below my feet, some running fast, etc. Â I want massive monsters lumbering around castles and I want small or hidden creatures waiting to strike.

Visuals are important to me, but not in a graphics snob kind of way. Â I can go back to the original EverQuest and the graphics don’t phase me. Â Something they’ve done visually makes it all work. Â I like diversity. Â If everything starts to look the same then I start to get bored quickly.

I was running around WildStar last night and suddenly became overwhelmed with boredom. Â I realized it was because for the first time I had reached and area of the game that felt mundane and all the same for over an hour of play. Â The mobs were the same, the terrain was the same, the doodas in the world were the same. Â WildStar typically feels well put-together but this area was not. It took only two deaths in a row for me to log out. Â I largely blame the visuals and mob diversity for boring me to the breaking point.

This goes back to the idea of having a world that inspires, immerses, and captures the mind and heart of the player. Â Monster diversity is a major ingredient.