I was browsing around gaming news sites when I noticed that “Lego Minifigures Online has entered open beta.” I think I vaguely remember hearing something about the game a while back so I decided to try it out. Surprisingly enough I saw Funcom’s name attached to it. Anyway, I love Legos and video games and even Lego video games so this should be great, right? Here are my thoughts after playing for around three hours. 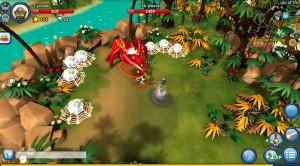 Lego Minifigurs Online is pretty much Diablo: Jr. Edition. You run around from a birds-eye perspective and whack monsters and break stuff. The game doesn’t seem to be terribly demanding spec-wise so I was able to run everything on Ultra with ease. It may not have looked quite as good as some of the other Lego Games out there but it still had its own charm. There are also several different genres of Lego represented in the game from stuff like sci fi, fantasy, and even real world.

The gameplay is fairly simple. You run around on a somewhat linear map fighting monsters. Along the way you will come across quests that will automatically activate for you and they usually boil down to stuff like “Break a bunch of this” or “Collect a bunch of that” and so on. When first starting out you get to choose between three sets of minifigures that make your party. I went with the one that had a cyclops, plumber, and some fantasy lady with a bow. Each character represented a different category: Striker, Builder, Defender. Strikers do more damage, builders build faster, and Defenders are beefier I guess. Each Minifig has a different basic attack along with a special attack. My cyclops smashes with his club and shoots an eye laser, the plumber throws plungers that I think slow and also has an AoE pop-up attack, and the defender lady shoots three arrows at once and also has a rope shot that AoE roots guys. You play one character at a time and can switch between them by pressing their respective number slot of 1,2 or 3. Each character has their own life bar so if one isn’t doing to hot you can swap them out. As you gain exp you can level up your minifigs with some of the stars you collect and give them various bonuses.

There’s also another interesting element to customize your stats. A Brick Menu can be accessed and it shows you a gray lego figure. Using various colors of legos (red for striking, Blue for Defending, Yellow for creativity) you can add to the bonuses of your character. At least I think that’s how it works since they didn’t really explain it at all. You eventually unlock larger pieces and the pieces you already have level up to become more effective. It’s interesting trying to fit them in different ways to maximize the kinds of bonuses you get. 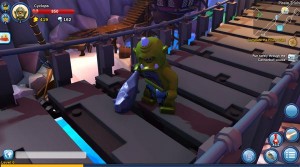 Lego Minifigures Online may not be a very deep or thrilling experience but there is something there that makes you want to keep playing. Unfortunately, for me at least, I won’t be doing so due to a large number of factors. I’ll detail them below.

Pocket Adventures & Epic Dungeons – As you travel through you game you come across several little side areas which lead off to things called “Pocket Adventures.” However the only way to gain access to said adventures is through the game’s first paywall. Only subscribers get to enter into the Pocket Adventures. As I played through I must have passed five or six of these and each time it felt like a small flick to my eyeball. Then I came across my first “Epic Dungeon” which also requires a subscription. That’s just not cool. I don’t mind paying subs for games but I find it really annoying when a F2P game has not only subs but a huge number of nickel-and-diming shop items, but I’ll get to that next. 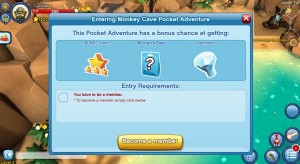 Microtransactions & Diamonds – TheÂ business model forÂ LMO is pretty heinous. In the game there are two types of currency: Stars and Diamonds. You can find stars and they are the basic currency that is used to buy upgrades and such. Diamonds can also be found but their drop rate seems to be astronomically low. You can get a decent amount from completing story quests but I have a feeling that the well will run dry sooner rather than later. Diamonds are what you use to purchase everything in the store. You cannot buy a minifig of your choice and must instead buy a pouch for 750 diamonds and it will give you one figure at random. It’s actually fairly interesting to note that you can only buy the lowest amount of diamonds in chunks of around 1250 for $4.99. I find that interesting because it’s not quite enough to cover the price of two minifigs so you will be left with extra diamonds. It’s the same kind of BS that Microsoft did back when they dealt in Microsoft Points.

You can also use your diamonds for other stuff though. Lets say you want to upgrade your character once he levels up. You could spend your stars, and you will, but you will barely have enough to cover one character. So you will either have to be happy grinding away trying to collect stars OR you could take the easy way out and throw a few dozen diamonds at them. Need some health potions? That’s some more diamonds. Heck, you can even buy a months subscription for something like 2000 diamonds. The amount of time it would take to farm that many would not even be worth the effort. You are better off just subscribing to the game for $8 a month. 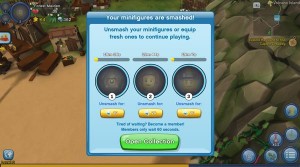 Smashed Characters – From what I’ve experienced it is not very easy to die in Lego Minifigs Online. I’ve come close but never actually had it happen. I was curious though so I decided to let all three of my characters get wiped out and this is when the ugliest aspect of the game showed up. Each time one of your characters dies he becomes “Smashed” and is not playable for a certain period of time. For me it was 20 minutes, but I would not be surprised if the time goes up as you get farther in the game. So you are basically put in time-out if you wipe out all of your minifigs. But wait, what’s this? Oh, of course! Diamonds! You can pay diamonds to unsmash your minifigs! That’s when I exited the game and uninstalled it.

Oh what could have been…

I’d love to imagine that somewhere out there in an alternate reality Lego Minifures Online was a great game. Not only accessible for all ages whileÂ still having depth, but featuring a fair balance in its free-to-play model. Too bad we don’t live in that universe. Instead LMO is a shallow F2P game that locks content behind paywalls and features ridiculous microtransactions. I just don’t get it, honestly. I don’t think it’s impossible to make a fair and balanced F2P game. I just wrote about Marvel Heroes and how great I think they are doing. Maybe it’s not fair to judge the game when it’s still in Beta. Things COULD get better, right? It’s possible, sure, but anybody who is considering sinking any real money into this “beta” should really think it through and possibly wait.

I just can’t shake this bothersome feeling I get when I think about the microtransactions in this game. Two types of currency, paywalls, pay-to-skip options… This seems a lot like the ugly model that a lot of cell phone and tablet games use. But it couldn’t… Could it? *GOOGLES* 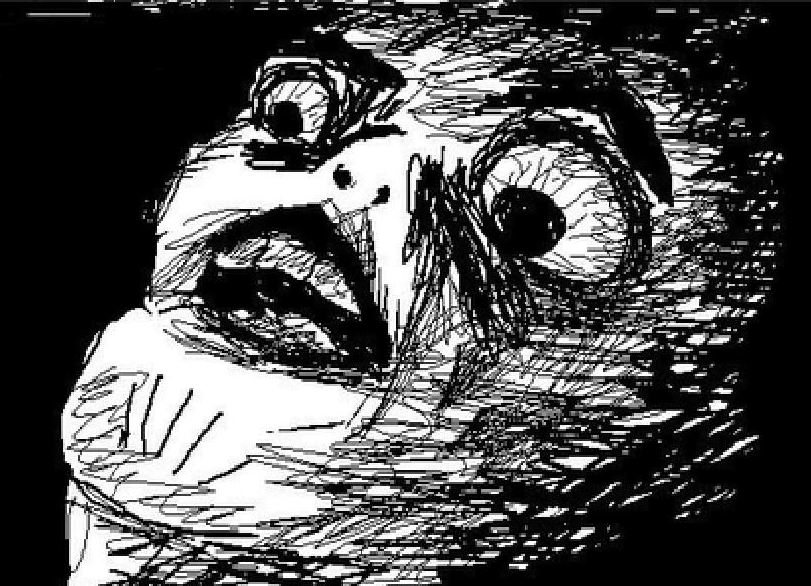