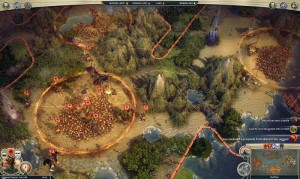 I had no idea whatÂ Age of Wonders 3 was before I saw it and I’m not entirely sure I’ve ever heard of the series either. To be fair, there seems to be a mess load of games that start with “Age of” and end with something different like Empires, Mythology, Wushu, Conan, Conquest, and a crap-load of other stuff. From what I could tell by looking at screenshots it appeared to be like a Civilization game but with turn-based combat thrown in the mix. The concept seemed fun enough so we gave it a go and ended up playing four hours straight (Which you wont get out of me often). I don’t really feel like delving into the mechanics of the game, which we are both still figuring out anyway, so instead I’m going to talk about some aspects of the game that I really enjoy. I also might throw in a couple of things that irk me as well, depending on how things go. Also I should mention that it is a turn-based game. I was almost finished writing the post and I wasn’t sure if I had mentioned that before. You can do either simultaneous turns or classic.Â

Heroes, Races, Classes – At the start of each game, depending on your setup options, you get to choose a hero character to play as. There are a bunch of them made that cover every race and class combination but you can also make your own if you want. You get to customize how they look along with some specific specializations that determine some of the spells you get to cast. Your other spells and abilities are determined by your class. So if you want to make an Orc Sorcerer named Nubbins The Bum-Tickler or whatever then that’s cool. I did make that guy, by the way. Your hero’s race determines your civilization’s race as well. I’m not positive on exactly what race encompasses but from what I can tell it determines what kind of environment you like best, I think it might add some racial buffs/debuffs, and also gives you a special racial unit. Your class also gives you a specialized unit as well.

Magic – I really like all of the different kinds of spells you can cast. You research them over time similarly to research in games like Civ.Â  Some of them will give you passive bonuses while others can do cool things like terraform areas, create protective shields around your cities or magical walls, call in thunderstorms, summon special units, etc. That’s pretty much just the kind of stuff you cast while on the map. When you get into combat you can also cast different kinds of combat specific spells that deal damage, buff, debuff, and so on. Lots of cool stuff.

Items – Over the course of the game you can come across different kinds of loot that you can get by defeating enemies and exploring places. Your hero characters get equipment slots of weapons, shields, accessories, mounts, and some other stuff I’m probably forgetting. The stuff dropped has a varying level of rarity so some of it may be common or legendary.

Fantasy Theme – I love the overall theme of the game. Keen and I are both fans of fantasy-based stuff and we really enjoy interacting with cool creatures like Dragons, Giants, Beholders and all the other stuff.

UNDERGROUND – This is probably the single coolest part of this game and it blew our collective minds. We played our first game with pretty much all of the options set to their default positions. We noticed that several characters and abilities mentioned burrowing and underground. I noticed when making the game that there was a box to tick that read ‘Underground’ or something like that. I figured that maybe it’s something like burrowing units in Star Craft. For our next game we decided to try it out and enabled the feature. One of us eventually found our way to an underground passage in the middle of nowhere and upon entering we were shocked to see that an entire game map existed below us. I’m not sure if it is exactly the same size as the overworld but it totally increases the size of the game you are currently playing. We though medium might have been a bit large for our first game so we changed it to small, but with the underground added in I’m pretty sure it was a deal bigger than medium. The mechanics below seem mostly the same except the atmosphere is different and you see stuff like lava more often. I think some races can get bonuses related to the underground as well. One thing that I did find out yesterday is that some areas are blocked off and cant be traversed. For these you have to bring down a builder unit and essentially carve out room for yourself. 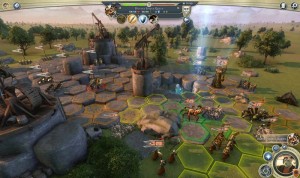 Stuff I’m Not Crazy About

Downtime & Waiting – I guess this is probably common among most turn-based games. It’s less of a big deal with simultaneous turns but I’m not really fond of that mechanic. To me it seems to reward whoever can move first and act with their units which completely defeats the purpose of slow strategic planning. The main issue here is when it comes to combat. Whenever you or others are drawn into a battle then EVERYBODY is forced to watch regardless of whether they have units present or not. This can get pretty darn tedious when you have to wait doing essentially nothing while you watch somebody else play. There is an option for auto combat and it gives you a rating on your chances but I have a few problems with it. The first is thatÂ  I don’t trust that message since it always screws me over. The second issue I have is that it’s boring. I’m not saying that I have to actually play out the combat all the time but at least Civ games play out little animations that are visually appealing and give you a small sense of what happened. Keen and I decided to implement a rule that we auto-combat for pretty much everything that doesn’t rate as too dicey of a situation. It would be awesome of there is some feature or option we are unaware of that would make this better but it is the best thing we can do for now. Hopefully in the future they don’t force you to watch the combat of others or at the very least they add a speed-up option like there exists in singleplayer.

Confusing Tech-Tree – The problem here seems that there doesn’t appear to be one. Maybe there is but I can’t really understand it. When you want to research your next spell or whatever you pick it from your book. There seems to be only two pages available. Some stuff naturally gets replaced by upgraded versions of itself but other things might lead to entirely different kinds of spells or even spells that appear weaker. I just wish I knew what determined which spells would show up next and maybe somebody could fill me in on this.

Lack of Units & Upgrades – This probably isn’t that big of a deal and I’m just being picky. It just seems like the unit variety is pretty darn low. For different unit types like archers, pikemen, cavalry, and so on there seems to be only one option and maybe an additional one based on a class or race specific unit. So you can make stuff likeÂ  a Tier 1 swordsman or whatever but there doesn’t seem to be an stronger version of that. I think the only way to make your units better is by using them in combat and ranking them up. The longer games go on I find that most of the units you can make end up being pretty junky and you will need to search out special NPC races to conscript from. So after many, many turns I’m leading my Orc army that consists entirely of Dragons, Giants, Fey, Eldritch Horrors and the like. Those are some nasty tier III units and up and the stuff your civilization makes just can’t compare. Again, there is always the off chance that I’m doing something completely wrong. There doesn’t seem to be a tutorial from what I can tell and the in-game help scared me off almost immediately.

While I can’t speak for Keen, I can say that I’m having a blast with the game. It totally falls into the category or games where you feel like you absolutely MUST play out just one more turn and before you know it six hours goes by. It’s a bit light on the empire building mechanics but the interesting turn-based combat makes up for it. Worth looking into, at the very least.