Yoshi’s latest game is out, and it seems to be getting a lot of mixed reviews. I don’t think Yoshi’s New Island is nearly as bad as some people think it is, but maybe I’m in the minority. To me it plays almost exactly like the previous games with only a few bumps along the way. 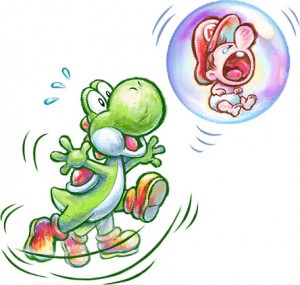 The game is very much similar to the original SNES title. The levels and bosses may be a bit different but the story seems to be essentially the same. You play as Yoshi carrying around baby Mario on his back. When you get hit Mario starts to float away in a bubble and scream like banshee until you either get him back or the timer runs out and he gets swooped away by baddies. Yoshi can swallow most enemies and turn them into eggs which he can then throw at baddies or other triggers within the level. Yoshi retains all of his other classic moves such as his ground pound and flutter jump. In each level there is something like 20 red coins hidden around as well as five flowers. Plus completing a level with a full 30 stars, or whatever the timer points are called, contributes to the overall percentage of completing a level. 100%-ing all levels in a specific world unlocks a bonus level. So yeah, pretty much exactly like the original game. 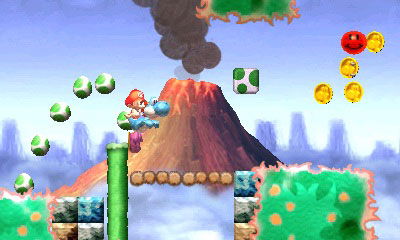 The visual style seems to be pretty divisive. The original game used a kind of crayon-drawn aesthetic but the new one is some kind of chunky clay pastel thing. It’s hard to explain, really. The game does seem to look pretty bad in screenshots but when you are actually playing (and in 3D) it does look a lot better.

You get some new egg types this time around. In some levels you will get to use a rather gigantic egg which you need to use to break down pipes either directly or by banking them off walls. There’s also a larger, but not quite as large, heavy egg which you can roll out ahead of you like a large boulder or to weigh you down in water.

Yoshi transformations are back and I think some of them are new. There’s stuff like a helicopter, submarine, jackhammer, and I think there is a hot air balloon as well. You wont encounter these in every level but when you do you must use the gyro controls to steer the transformed Yoshi around.

I do really enjoy the game despite the flaws it may have. The music isn’t great, which is a real bummer, and the transformation sections are pretty “meh.” The levels themselves aren’t overly challenging but the difficulty is definitely a lot higher if you are trying to 100% the level. Making it through with 30 star points and also finding all of the coins and flowers can be pretty tricky, especially on most of the bonus levels. Yoshi’s NEW Island is basically Yoshi’s Island, but not quite as good. Still fun, but probably not destined to be a classic like the SNES game. However, if you liked Yoshi’s Island DS then you will probably enjoy this.