Ever hear of Titan Quest? Â It’s an awesome Action RPG (ARPG) set in Ancient Greece, Egypt, and Asia. Â Titan Quest was/is one of the best ARPGs ever made. Â Long story short, there won’t be any more Titan Quest games but a handful of the team responsible for making it great now have their own studio making a game called Grim Dawn. Â While researching the game prior to my purchase, I thought it was fascinating to learn that the team actually acquired the engine and tools from Titan Quest. Â  It shows in both the polish what this 7-person team has been able to accomplish. 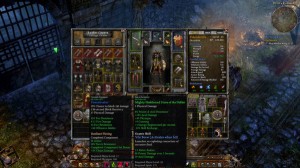 Crate Entertainment launched their Kickstarter back in 2012, got twice the funding they wanted, ended up on Steam, and are now a pre-release title for sale. Â I think 2/3 of the game is available for play. Â The world is a mystical and unnatural post-apocalyptic world wrought with chaos. Â The setting is incredibly dark and gritty.

I’ve logged a few hours so far, and like what I see. Â I definitely feel the spiritual successor to Titan Quest vibe, but I’m also sensing a lot of influence from Diablo 2. Â Gameplay in general feels tough like it’s meant to appeal to people who want to think about combat and formulate a plan.

You’ll start the game as a generic male or female character and soon after be able to choose from a couple of classes.

Okay, so those classes are pretty neat. Â Best part? Â You can combine them. Â  You will eventually get to choose a second class and mix/match their abilities. Â This is one area where Grim Dawn shines over recent ARPGs like Diablo 3. Â You’ll have to choose what abilities you want, when to unlock them, and create a build that both matches your play-style and is capable of overcoming a difficult game. 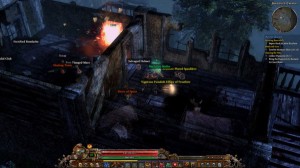 I know I’m sorta late to the scene, but I have a feeling a lot of people haven’t been following what is already turning out to be one of the better ARPGs ever made. Â Definitely check it out for yourself. Â You can get it on Steam, from their official site, etc.

Summary of why you should care about Grim Dawn

Heads up, the game is still unfinished (multiplayer isn’t even in yet) but they are making great progress and seem to follow their road map pretty well.