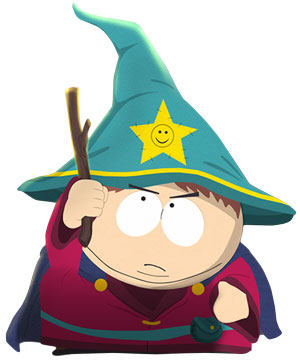 In the beginning you take on the role of the “New Kid” and create your very own South Park character. The creation is fairly limited but you are able to pick from several hair styles and colors, a base outfit, and even skin color (Which does influence a few conversations in a way I’m sure you can imagine.). Once you are in the game you can wobble around and explore your environment which consists of parts of South Park (Some neighborhood streets, downtown, etc.). Almost immediately you will find your way over to Cartman’s backyard and be asked by the grand wizard himself to join the KKK — the Kingdom of Kupa Keep. It’s then that you get to choose between one of four classes: Fighter, Mage, Thief, or Jew. I’m actually very curious as to how many people do a double take at that point in the game. Anyway, through most of the game you will essentially be taking part of the kids’ fantasy game that has the humans and drow elves waging war over the fate of The Stick of Truth which grants the bearer powers over the universe.

The really hilarious part is seeing these kids try and pull off these fantasy powers. For example, as a Mage you use a firework as your fire spell. For lighting you throw a bucket of water on them and then drop some wires connected to a car battery.

For a large part of the game you will be running around town visiting different places and interacting with character. When you move around the screen scrolls with you but eventually you need to load into the next area. That’s easily one of the game’s biggest negative point; there seems to be a lot of load screens. They aren’t terribly long but they do show up too much.

Out of combat you have access to several different abilities that allow you to interact with your environment or gain access to new areas. Some places can only be reached once you can teleport and others are only large enough to accommodate an underpants gnome. You can even take out some enemies without even entering combat simply by using the environment to defeat them. This is done in many different ways like knocking a loose wire into a pool of water or using your dragonborne fart shout to ignite a flame and blow people up. There’s some great and hilarious stuff.

As for the actual combat, it plays out very similarly to Paper Mario. In case you aren’t familiar with that I’ll explain. The combat is turn-based and on your characters’ turns you can select an action to perform. Unlike Paper Mario, however, you can choose a basic action (Item, Buddy Ability, Summon) and a regular action (Attack, Ability). Most of these will require you to do additional button combos or timed button hits to get the most out of your attacks. You can also defend in a similar manner by hitting the button at the exact time during the attack. To make this simpler it also shows a small circular flash beneath your character. In combat you will also control one buddy character who has unique abilities and characteristics. Butters is a useful Paladin who can pat you on the back and heal you, among other things, and even heal some allies out of combat. Kenny is a Princess and can attack with her bow or charm enemies both in and out of battle with her feminine wiles, which is pretty much just flashing them. So as you can see it’s some pretty entertaining stuff.

There are only 15 levels to obtain in the game and you will easily get there by the end. Actually way sooner if you do the side-quests. When you level up you gain access to new abilities along with getting an upgrade point which can be used to better said abilities. I played as a Mage which has four abilities, which is likely the same for everybody else. Each ability has four upgrades that can make it do more damage or add splash damage or other effects. You won’t get enough points to max everything, though, so you can to plan ahead. In addition to these you also get passive parks that give you various bonuses. You get a park point every time you obtain a certain amount of Facebook friends. Not real life Facebook, by the way. I should probably mention that. All of the in game character info, quests, maps, and so on are all presented as if they are apart of your character’s Facebook profile.

Throughout the game you will get A LOT of different equipment. You can equip a main weapon and ranged weapon along with a hat, body, and glove slot. You can also get a bunch of wigs, makeup, facial hair, and glasses but they are all just vanity items. Your actual equipment will provide various bonuses and different stats. Most pieces of equipment will also have one or two slots which you can use to slot in some bonus stuff like fire damage, life drain, armor bonuses, etc. There are a whole lot of inserts. The outfits and weapons are really, really cool and look awesome but you seem to get them at such a rapid pace. You will find one set that looks totally awesome and not long at all afterwards you will find a new set of better stuff, which may or may not look as cool but still… You replace your stuff so fast and having to re-slot all of your stuff gets a little annoying.

There are other items in the game which are pretty much your run-of-the-mill apothecary items. Stuff that heals your health, Power Points, and Mana. You will probably use these often enough but they do give you a whole lot of them. It won’t be long at all before you hit the item cap for a specific item and just leave extra loot lying around.

I think that The Stick of Truth lives up to the reputation of most of Obsidian’s games. Unfortunately, that means that in addition to being great games they are also fairly buggy. Throughout my play-through I encountered several glitchy situations where I would be stuck looking at something and forced to load or combat would hit a snag and stop continuing. Fortunately I never seemed to encounter the same bug twice and I only froze once, which is good, but there is a lot of slowdown. Most of it seems to revolve around the autosave feature, but there are other times when the game starts to chug a little when it isn’t happening. Still nothing that I would call gamebreaking, though.

The game’s combat is very enjoyable, but even on hardcore difficulty it started to feel a bit easy. The pacing in the game could have been better I think. If you do a lot of the side quests you will get over-leveled and even receive some rewards which are way better than the equipment from the main quest line. I’m really not a fan of getting over-leveled by side content.

Overall, I wish they should have stuck entirely within a fantasy theme instead of dipping into sci-fi and modern.  The world could have been bigger with more fantasy locations, etc.  It’s difficult judging a game for what it is instead of based on what it could have been.

Despite the critiques, I would still fully recommend the game to anybody looking for an irreverent RPG.  For bigger fans of South Park I’m sure it’s even way better. On a single run through the game, doing all of the side content, you will spend about 14-15 hours. That may seems like a bit short for an RPG, but I think it works well for this game. Any longer and it might start to wear on you.