I put quotes around Beta because any game that gets a huge public beta, especially this close to release, seems to serve mostly as a promotional tool for a feature-complete product.

Keen has been playing the Titanfall PC beta and I’ve been trying out the Xbox One version, which was the platform I had originally planned on getting the game for. However, now that I’m getting Keen’s old PC, which is a significant upgrade to mine, I’m tempted to get the PC version so that we could play together.Â  Having only played the Xbox One version I can’t really comment on any differences there might be. Just throwin’ that out there. 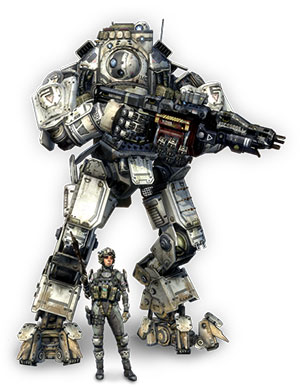 Titanfall’s acrobatic elements are pretty cool. I think wall-running makes every game better. It’s really easy too since all you seem to need to do is jump alongside a wall. It might be one of these things that is easy to use but harder to master. At the start of a few matches I saw some guys pull several maneuvers to gain a lot of height and distance and get themselves through the top window of a nearby building. They were like ninjas running along the tops of a bamboo forest in one of those martial arts movies.Â  Another thing that is awesome is how you can mount ledges. More FPS games need to let you mount ledges and climb up.Â  PC players seem like they would have an easier time with all of the acrobatics since they can jump and turn the camera at the same time. Since the controller has you jump with the face button and control the camera with the right stick you are force to either have very precise and fast movements or claw your hand to move the stick and jump ant the same time.

The actual Titans are fantastic, but it seems to cause Battlefield Vehicle Syndrome. In case you haven’t heard of that, since I just made it up, it’s the feeling that enemy vehicles are incredibly difficult to take down but for some reason whenever you enter one yourself the armor is made out of wet cardboard. I also seem to have some problem aiming with the shoulder mounted rockets since they seem to want to curve perfectly around my target rather than hitting it. Being able to latch onto an enemy Titan and rip its hatch open and fire at its circuits is pretty rad, though. I also like how you can exit your Titan and leave it to guard the outside of a building while you run in to clear it or capture a point.

I’m not totally sure how I feel about the 6v6 player limit. Usually I prefer FPS games that have a lower player limit but by that I usually mean something like 8v8 or 12v12. They’ve also included a few grunt bots in the multiplayer for some some reason. Maybe this is to kind of fill out the matches so they don’t feel dead or perhaps they wanted to make it feel more like a FPS MOBA by adding in some AI creeps. Either way they don’t seem to pose any kind of threat, at least not in the game modes I played.Â  I also like how when your team loses you can try and make it to an evac point before they kill you off; like it cheapens their win and softens your loss.

There’s a definite Call of Duty meets Brink vibe in Titanfall. It all looks promising, and I think we both enjoy the Beta enough to pick it up.Â  Production quality is incredibly high; heck, watching your titan grab you and put you in its chest is something you have to experience — it’s amazing.Â  The features are all there, etc.,Â  but neither of us are really certain yet if there’s a long-lasting appeal.Â  Have you tried out Titanfall?Â  Let us know what you think.