For the past several days I’ve been exclusively playing Bravely Default right up until Toukiden came out on Vita. I’m still playing BD but now I’m just switching back and forth between the two. There’s actually a lot of really cool stuff out on the Vita now and it’s only going to get better as the year progresses. More people should definitely consider picking the system up and especially so if they own or plan to own a PS4.

Toukiden is apart of the new “hunting” genre that seems to have been created since Monster Hunter first came out. The game actually borrows several elements from MH and other similar games like Soul Sacrifice. Basically, you undertake a mission from the hub town and get sent to a location that consists of several smaller zones linked together. Your goal is to slay demons rather than monsters, though. You also get a special vision mode that highlights hidden items and breakable parts of enemies, which seems lifted directly from Soul Sacrifice. Unless Soul Sacrifice borrowed it from something else–I have no idea, really.

When you fight the large monsters and break their parts (Arms, Legs, Tails, etc.) you have to do some kind of cleansing ritual to get rid of it and get the loot for that body part. The demon’s parts may be gone but there remains some kind of translucent spirit form behind. So if you cut off a giant demon’s leg he can still walk around with his spirit leg. If you don’t banish the cut off piece then it can get recalled back. I’m not entirely sure if they limbs do less damage or what but I imagine they must. It’s not like Monster Hunter though where you can cut off the tail or whatever and basically render that attack useless or less viable. EDIT: Supposedly in the manual it says that the spirit limbs actually do MORE damage but also take MORE damage. I’ve also noticed that when you destroy their limbs they trip and fall over more when doing specific attacks or charges.

With all of the demon parts and items you gather you can create weapons and armor. I’m actually really glad that this seems pretty much just like Monster Hunter. I was not a real fan of Soul Sacrifice having no gear and basically just being about collecting limited-use spells. Just like monster hunter you usually unlock new armor sets and weapons once you’ve tackled the latest thing and harvested its parts. Unfortunately the game doesn’t have any kind of regular crafting system so you can’t make tons of neat knick-knacks, traps, potions, or whatever. That’s one of my favorite parts about Monster Hunter.

Some of the game’s weapons appear similar but for the most part play out a lot differently. There’s a long sword, dual blades, spear, gauntlets, flail & sickle combo, and bow. I feel like I’m forgetting something but I think that’s it. I’m honestly not a very big fan of many of the weapons. The flail and sickle combo looks awesome but it seems hard to use. I’ve mainly been sticking with the gauntlets which are slow but powerful and allow for some defensive options. One of my biggest gripes with the weapons is that it feels like their move pools are lacking. There’s not a whole lot for you to do with them or at least not a lot of options for tackling situations. 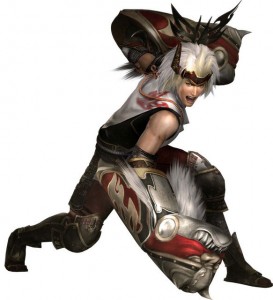 Another important part of the game are these spirit thingys called Mitama. They are souls of vanquished warriors that you infuse into your weapon. They gain exp or sorts and level up and unlock new passive bonuses. Each Mitama also comes with 4 special commands. The first is a recovery ability that heals you and seems to be on every mitama. Aside from that what you get depends entirely on the type you use. Defense mitama get abilities that increase your defense or let you block all damage and not get knocked around, attack mitama increase your damage/crit/etc, Soul mitama seems to be good for breaking parts, then there’s healing and speed types and so on. It adds another level to the combat which makes up for some of the shortcomings in some of the weapons.

Overall I’d say I’m very satisfied with Toukiden. It’s a lot better than Soul Sacrifice, which is still a good game in its own right, and is probably one of the better hunting games the Vita is likely to see over here. It can be a little unfair when comparing it to the latest Monster Hunter games, which are themselves sequels and expansions upon expansions, so you really have to judge it as the first game in it’s own series. Oh, and there’s also online play which is pretty awesome. If you see somebody running around named “Old Bastard” that would be me.