The NDA for EverQuest Next Landmark was officially lifted this evening via tweets by the dev team.Â  Let me just get right to it and say what I’ve been feeling for the last 24 hours: Landmark is AWESOME!Â  Within the first 20 minutes it was easy for all of us playing to agree that Landmark is a winner with unimaginable potential.Â  Well, that’s a lie;Â  I can imagine the potential! 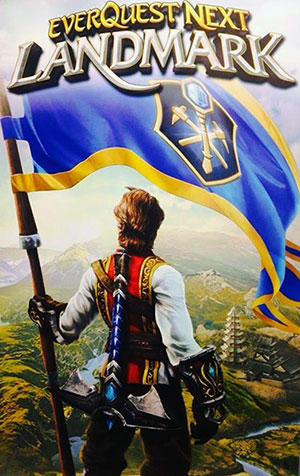 My coverage of Landmark, like all MMOs, will be ongoing.Â  I can’t possibly tell you everything in one post that I’m writing while the servers are down for maintenance, but I want to run through a few of my first impressions and key details that I feel you as a reader of this blog will want to know.

SOE wasn’t kidding when they said this was a real alpha and the game wasn’t optimized.Â  I haven’t ‘tested’ something this rough in a while, and that’s so incredibly refreshing (minus the lag).Â  Landmark is less polished than I thought it would be, but 10x more impressive in scope.Â  There are dozens and dozens of bugs, lots of imperfections in the UI, and an obvious lack of features waiting to be turned on.Â  What does work, however, excites me beyond words.

Building is… hard.Â  I guess I thought I would have the talent of the SOE artists who build during those streams.Â  I am clearly more akin to a finger-painting toddler.Â  One of my friends told me, “That’s nice Keen but you made a hole in the ground.”Â  I told her I would fix it, after which she replied, “Keen, you just made the hole bigger.”Â  There are many subtle nuances to how you can manipulate the building tools by pressing tab, shift+tab, and using the mouse wheel.Â  Every single little detail, angle, and embellishment can be tweaked.Â  I’m out of my league, but I’ll get there.

Effort will be rewarded.Â  I built an Iron Pickaxe but it took over an hour of farming trees to get the rare wood I need to craft one.Â  Just building a tiny little piece of a wall took me 18,000+ stone.Â  I feel like this is close to UO’s gathering where it’s not difficult to find the resources, such as mining in a cave, but it takes a long time to gather a lot of them.Â  I like this.Â  I like knowing I am going to see a reward not by something random happening, but through my dedication.

My biggest complaints so far:

Landmark is as fun as you want it to be.Â  You are going to have to make your own fun at times.Â  If you like digging holes, chopping trees, and using your imagination to bring things to life then Landmark is the right game for you.Â  If you’re patient and can look forward to eventually having combat, underground biomes, commerce, and even more reason to explore then that’s just icing on this already delicious cake.

That last sentence is really key.Â  Landmark right now is lots of fun, but seeing what it is now lets me know that what’s coming is going to make it so much better.

Well done SOE.Â  Polish it up, add the rest of the features, and you’ve made a masterpiece.