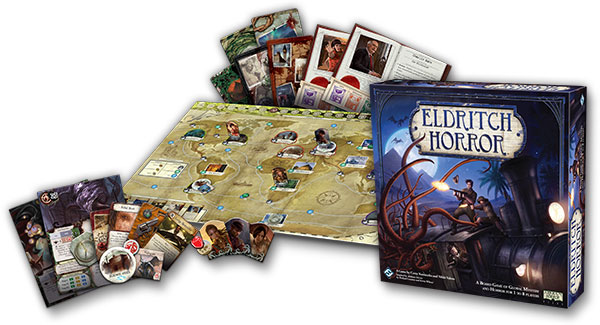 Eldritch Horror just arrived and Keen and I finished up our first game yesterday. Or I should say we LOST our first game yesterday. This didn’t sit quite well with Keen who was rather annoyed that we spent several hours getting crapped on just to end up getting the world devoured by some elder god thing. I’m not entirely sure if he fully understands a lot about the Cthullu Mythos. I’m not exactly an expert myself and I’ve never read any of the H.P. Lovecraft stories but from what I’m gathered over the years my understanding was that most of the time everybody dies horrifically or ends up bat-$%^& crazy. I’m okay with losing in difficult games, especially if it fits in with the theme. Keen has never been overly fond of seeing the hero die. I remember when we saw Gladiator for the first time; he was loving the movie up until *SPOILERS I guess…? For a 13-14 year old movie…* the main character gets killed off. After that he kind of flipped out and said it was the worst movie ever. Interestingly enough, that scenario has played out several times over the years.

So, getting back on track here, the goal of the game is basically to travel around the world and close extra-dimensional portals, gather clues, solve mysteries, fight monsters, and do whatever else required to prevent some Ancient One from rising up and ruining your day. In order to win you need solve 3 mysteries pertaining to your chosen bad guy before your doom track reaches zero. I won’t go into full detail about the rules of the game but basically there are three phases: Action, Encounter, and Mythos. In the action phase each investigator performs two actions then in the encounter phase you encounter the city/wilderness/sea/portal/monster/etc. that you are on. Lastly the Mythos phase has you draw a card that determines if any clues, gates, monsters, or other horrible things happen.

We went with Azathoth which was supposed to be the easiest ancient one to start out with. I find that odd since you LOSE the game as soon as he shows up whereas you at least get to confront and potentially (although not likely) defeat the other guys when they rise. A pretty cool aspect of Eldritch Horror is how each Ancient One is very different from the others. They have unique mysteries, research encounters, special encounters, and even their cultist monsters have specialized stats. I like the idea of all of that since it seems like it makes playing against different bad guys feel different.

We each had to pick an investigator to play. They all seem pretty different and have different stat which determine the amount of dice you roll for checks along with having unique abilities and starting items/locations. I don’t have all of the names down yet, or any of them actually, but I do remember that Keen went with some fisherman guy who had a nifty ability to travel along boat paths. I chose some old dude because he seemed decent and wise but that didn’t turn out so well. Over the course of the game my investigator ended up hearing voices and slowly losing his sanity. The thing that ended up getting him, however, was an angry mob in Tokyo. I don’t know what their problem was. I was just trying to close a damn portal and stop the end of the world. After that I had to bring in a new character but even that didn’t last long since shortly after the doom track reached the end of the line and the world was devoured. 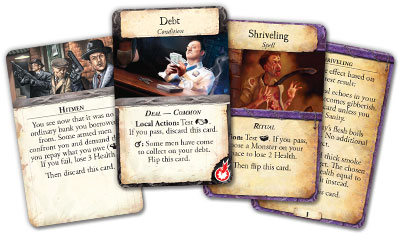 Another really cool aspect of the game are the condition cards. Throughout the game you will acquired various conditions like chest wounds, debt, paranoia, cursed, and so on. There are several of each type but what’s really neat is how they differ. On the back of each card, which you aren’t supposed to look at, there is a unique effect that can be revealed when a reckoning is triggered. For example, you might have to take a debt condition because you failed a check or something like that. On the card there will be a little symbol signifying what happens when a reckoning is triggered. When that happens somebody comes to collect your debt. Sometimes it can be a bad thing and other times it can be a REALLY bad thing. When my debt was collected I ended up just getting arrested and delayed for a while. From what I’ve heard, however, it can be a lot worse. Like you are in debt to powerful evil forces or you made a dark pact or something awful. I don’t want to go through the whole condition deck and see what’s in there because it would ruin the surprise.

I had a blast playing through Eldritch Horror and I can’t wait to jump back in and try for a win this time. Even if I lose again at least it makes for an interesting story. Hopefully I can convince Keen to join back up with me. Two brothers, traveling around fighting paranormal forces and trying to prevent the end of the world. You know… that would make a great TV show!