This Christmas Keen and I received Mice and Mystics, a cooperative adventure board game. We actually really wanted the game last year but unfortunately it was sold out everywhere. However now we have it, along with its expansion pack, and we absolutely love the game.

The following is a brief rundown of the first chapter with minor spoilers. Mice and Mystics uses several different board tiles that can be set together to form the areas of each chapter. The players take control of several different characters who were turned into mice and make their way through a scripted adventure spanning several chapters. Miniatures are used along with cards and tokens. Combat and other actions are handled with special dice and so on. I’m sure you get the idea.

Our first play-through of chapter 1 actually went surprisingly well, but in retrospect I think that is mostly due to the fact that we got several of the rules wrong and also forgot many more. Our first real run is where things got interesting. The game starts you out in a prison guarded by rat warriors and after dispensing with them you are able to slip through the floor grating and fall into the water of the sewer below. This is done by flipping the tile over which is actually surprisingly brilliant for the simplicity of the action. We can get to this part with no trouble at all but from here things can start to get a little dicey. The water that you fall into has a current that will carry you away if you don’t climb out, which can be a difficult task if you don’t get the rolls you need. Not only that but every time you enter a new tile you must draw a new encounter card which brings out some new baddies. Through all of our attempts we have mostly encountered more rat warriors in this area and every now and then some cheese-stealing roaches. However on one instance we ran into a poisonous spider but luckily we were able to dispatch it. One of the neatest things about this area was a hidden fishhook and thread item that could be found in the water. It’s an invaluable tool that you can use to bridge certain spaces. It makes getting out of the water a lot easier, too. 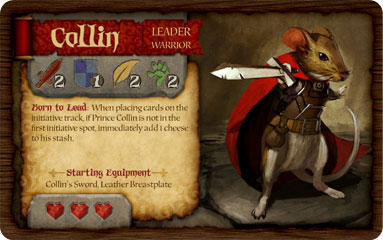 The next tile is a tunnel area which has never really given us much pause. The interesting part, however, is you can choose to explore an optional area and complete a sidequest by accessing the area on the opposite side of the tile. So far we have always chosen to do that since you get can a reward that might help you later on in the campaign. The sidequest room is the first real problem area that we have run into and is actually the site of our first loss. You enter a kitchen filled with swarming roaches. On a nearby table there is a pile of cheese that has the attention of two additional roaches. If they are successful in eating any of it then it gets added to the minion cheese wheel. There are also other ways you can get cheese added to the wheel and when it gets filled you trigger a surge event which usually means more bad guys and being one step closer to losing. Unfortunately, the surge effect on this tile summoned the castle cat, Brodie, who proceeded to eat us. He pounced all over us, chased us down, and eventually slaughtered us all. It was equal parts horrifying and hilarious.

After you finish up with the kitchen and make your way through more tunnels you wind up outside in the courtyard, which brings with it its own unique tile rules. If you roll a 1 while trying to move then your character gets attacked by the crow circling above. It has so far made for some intense situations as we try to fight our way through the minions while trying to make it to the safety of the tree hollow, which is the end of the chapter. Fortunately the crow is an equal opportunity predator and will pick off any enemy minions that roll a 1 as well. Our last play-through of this area featured a surge event that had us face off a huge centipede while trying to deal with all of this at the same time. It was a real nail biter and several times in came down to 1 roll whether we would lose or not.

It’s a great game and each time we played we never quite experienced the same stuff. We’re looking forward to making our way through chapter 2 now and whatever that may bring. It’s a lot of fun and doesn’t require any kind of Dungeon/Game Master and can even be played alone. I’m actually really interested in checking out some more board games when we’re done with this so feel free to make any suggestions.