The story of AC4 was fantastic.Â  I will say that it can be confusing if you aren’t paying close attention, and it can be overwhelming if you choose to read into all the text thrown at you.Â  I’ll be the first to admit I skipped most of the extra stuff, focusing instead on missions and cut scene-based story telling.Â  If you get lost, just read the wikipedia entry and you’ll be fine.Â  I’ll do my best to give you a quick summary without spoilers.Â  You’re Edward Kenway, a pirate.Â  You get mixed up in a plot driven by the Templars trying to seize power over world leaders by assuming the identity of a would-be defecting assassin.Â  Throughout the game you will play for both sides all the while unraveling the big mystery of the game and trying to live the glorious life of a pirate.Â  All isn’t what it appears to be, nor will it ever be, in this fantastic adventure.Â  I get goosebumps just thinking about it. 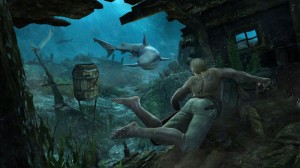 Much of the game takes place on foot like you may have experienced in previous Assassin’s Creed games, but a huge portion takes place on the ocean.Â  I can easily spend hours sailing around the open waters of the Caribbean attacking English, Spanish, and French vessels ranging from small schooners to massive Man-o-Wars.Â  Sinking vessels is gratifying, but damaging them enough to grapple and board them gets the blood pumping!

Controlling a huge ship is like a dream come true for me.Â  The controls are basic, but slowing down and speeding up, aiming cannons, sailing through storms, attacking forts, drifting through swamps, and seeing all the ways a ship can be used in AC4 is easily the best ship usage I’ve ever had in a game.Â  When sailing around isn’t enough, diving to find treasure and upgrades provides yet another unique experience on the ocean.

The world is AC4 is overwhelming.Â  Every time Graev watches me play heÂ  says, “This game is just too big… way too big.”Â  He is also referring to the enormous number of collectibles you can go after.Â  When sailing out in the ocean, occasionally you’ll come across a tiny little island.Â  Exploring anywhere simply requires you to slow your ship and dive off into the water and swim to shore.Â  You’ll find animals to hunt, treasure to loot, treasure maps, and mysteries Mayan artifacts.Â Â  The number of upgrades and opportunities to customize your ship and person are yet another way AC4 provides hours and hours of depth.

Once you’ve had your fill of the ocean, set sail for one of the dozens of ports like Havana, Nassau, or Tortuga where you’ll find hundreds of collectibles and all sorts of side missions.Â  Take on the usual assassination contracts or help the Templars, the choice is yours. These side missions can be the source of much confusion.Â  I didn’t quite understand why I could walk up to a pigeon coop and take a contract in the very first city of the game.Â  Turns out, it all makes sense as you progress the story.Â  I recommend waiting on all these side missions until you’re very, very far into the game (15+ hours for me).

The environments here make for tons of unique adventures.Â  Some of the cities are fully developed with forts and tons of buildings, but others are little sea towns with shacks or cities built in old Mayan ruins.Â  The variety is excellent, and the scenery wherever you go is detailed and gorgeous.Â  I never tired of the land gameplay, and found it every bit as fulfilling as the ocean.

Bring me that Horizon

Whether you want to sink ships all day, assassinate an oppressive governor,Â  or unravel the mysteries of a secret order, Assassin’s Creed 4 has enough swashbuckling and explosive action to keep you on the edge of your seat for at least 25+ hours.Â  A somewhat confusing narrative and a few glitches here and there keep it from being an absolutely perfect game, but I have to give it a 10/10 for being so dang close.Â  If you haven’t picked it up, you’re missing out on what I feel was the best game of 2013.