All is right with the universe today, folks! I was looking at the latest poll for EverQuest Next and wasn’t expecting these results at all. 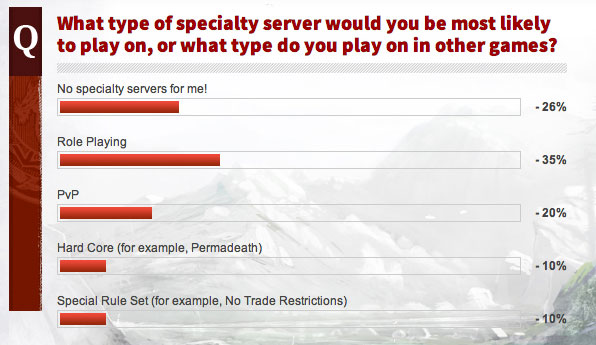 I was expecting PvP or something ridiculous like permadeath to rank at the top. Â Previous polls seem to be voted on by the certifiably insane, but this one restores my hope.

I voted “No specialty servers for me!” but I could have easily chosen role playing. Â Back in EverQuest II’s early days, Graev and I played on the rp server and actually rp’d. Â We were known as the Rumblebelly Boys, and we traveled to parties and performed our little synchronized dance and epic poetry. Â I guess I should have lead with the fact that we played eccentric Halflings… that makes it sound a little less weird.

Honestly though, I love standard rulesets. Â It goes back to playing the game the way it was meant to be played because that’s where all of the mechanics make the most sense. Â I never think PvP when I think of EverQuest, despite the special ruleset servers like Rallos Zek being pretty popular.

Ultimately it comes down to whether or not a special ruleset can sustain a population. Â If a permadeath server comes out, I’m sure plenty of people will play on it for the first few months. Â As times goes on, that server will inevitably have the lowest population to the point where it no longer makes sense to support it. Â The same goes for some PvP and RP rulesets — even normal servers, when too many are opened, get merged. Â Merging servers is the MMO death knell. Â Failed rulesets and wonky out-of-place features are another.