I know this must come as a shock to some people, but Keen and I aren’t really sports fans. At all. Well actually I take that back; we do enjoy baseball or perhaps the idea of baseball. I couldn’t tell you the last time either of us actually watched a game. So as you can imagine we usually steer clear of sports video games. The last one we actually bought and played was Madden 2000 back on the PS2 at launch. Â Even then I remember both of us thinking that this was not nearly as good as NFL Blitz. I must not have learned my lesson because years later I broke down and repeated the same mistake.

I picked up a copy of NBA 2k14 because I kept hearing people rave about how good it was and how awesome it looked. At the time I wasn’t entirely sure how I felt about basketball since I knew next to nothing about it. My only prior experience with the sport must have been in 6th grade. I was the fat kid who just stood under the hoop on our side of the court while everybody else ran around. Just in case you were curious. Still, I thought that I might like it so I gave it a try. I actually hadn’t been playing for very long at all before I experience a GOB moment. 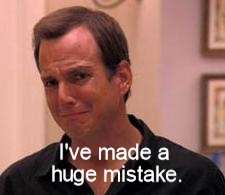 When you know next to nothing about a sport it’s probably a bad idea to jump in and try playing it, even virtually. I had no idea what to do other than to try and put the ball in the basket. In my first game I kept fouling people and losing the ball and just generally screwing up. I think they must have had 80 points or something on me before halftime.Â  I quit out to try and find some kind of tutorial. The game does teach you how to handle the ball, shoot, etc. You use the stick to perform various moves and handling tricks. It’s all very confusing and easily the hardest controls I’ve ever experienced in my life.

After I ran through the tutorials several times, and came out remembering nothing, I hit the internet to learn more about the difference between a point guard, shooting guard, and everything else that made no sense to me. I dropped by a forum for the game and inquired about some basketball knowledge. Surprisingly the people there were more than helpful, but some of the things they told me were truly terrifying. For example, not every player is the same! That actually sounds really stupid when I say it like that but I mean that every single point guard or whatever is unique and has unique skills. This may be obvious in real life but I had no idea that it would be like this in a video game. Apparently some players are better at performing various basketball-related tasks than others and against different sized players, etc. The truly horrifying part is when you realize that there are like 30 teams with 15 or something players or more. You essentially have to have intimate knowledge of EVERYBODY to even begin understanding this game. That’s like trying to learn a new generation of pokemon except they are all the same type but have unique strengths and weaknesses against each other. Oh, and they are all just Pikachus with different names and faces. Good luck with that.

So I realized that this was all much more than my simple mind could put up with. I should mention that there is probably nothing wrong with NBA 2k14 and that it does indeed look REALLY good. It just turns out that the game is really not for me. Probably not for anybody who doesn’t already know a lot about Basketball and who hasn’t played any of the previous entries since they just toss you in the deep end. If there is one thing you should take away from my story it’s this:

DO NOT EVER try any new experiences and NEVER try to broaden your horizons.