Keen and I bought into a 4-pack for some game a long time ago. Eventually I forgot what it was called altogether. Every now and then I’d ask him something like, “Remember that 4-pack thing we bought? Did that ever come out?” and the answer was usually an “I don’t know.” Then one day Keen says, “Hey, remember that 4-pack space game? The beta comes out tomorrow.” Now you have a little behind-the-scenes insight into the goings-on of our operation.

So anyway, the game is actually called Starbound and if I had to sum it up briefly I’d say that It’s basically Terraria in space. There’s a lot more to it than that but it’s the easiest way to get the point across. It looks very similar to Terraria and plays quite similarly as well. Dig holes, craft stuff, put up blocks in the fore and background, etc. I don’t know what game did this art style and gameplay-type first since there seem to be several of them but you get the idea.

The really exciting part about Starbound is the ability to travel to different planets, solar systems, and quadrants. There are several different planet types like forest, snow/ice, arid, jungle, desert, and moon. You aren’t just stuck on the first world they drop you on. Actually, they don’t drop you on a world at all. 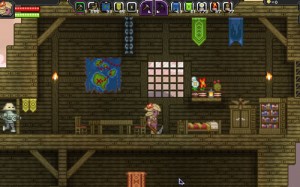 After picking one of several races and making your character you appear on a ship in orbit of a planet. You aren’t able to do much with your ship at first but once you fuel it up you can start traveling. There are also storage areas and a 3D printer thingy, which we haven’t really completely figured out yet. I was able to scan in a few items, mostly containers, and it created a schematic for them. Then I could replicate the item for some of the game’s currency called Pixels. We’re hoping that eventually you can do more with your ship like upgrade it or do space battles. We’re trying really hard not to look at a wiki or something that might spoil it for us.

When you beam down from your ship for the first time you wont have much except what you were able to get from your ship, which I think amounts to a flashlight, some seeds, a weapon, and reclaimer tool. The game features a quest system that basically gets you through the early stages of survival by instructing you to do things like “build a fire,” “Build a hunting bow and get food,” and so on. Warmth and hunger are two things that you need to keep an eye on. Warmth is really only a problem at night, or if you go to an ice planet, but your hunger slowly ticks down over time. You need to either find some food or kill something and cook it. The easiest way to do that is with said hunting bow, which gives you a greater chance of getting meat or a hide from an alien creature while your sword will giver you lower odds but will get you money from kills.

Crafting in Starbound is pretty simple. You can make stuff with different materials and by using different facilities like work benches and anvils, which will get upgraded over time. There seems to be a sense of progression since you are always trying to build your way towards something, which usually starts a boss fight that will drop a special item you may need. Planets are ranked by level so you have a pretty good idea of how difficult one may be. Right now we seem to be doing alright with planets up to level 10 but we’re struggling to get better equipped.

One of my favorite parts of the game so far is just traveling to other worlds and exploring. You don’t even need to dig below the surface to find cool stuff. The planets loop back around on themselves so you can run around the whole thing and see what it has to offer. Sometimes you may find friendly settlements and people who will sell you stuff, but mostly, from my experience, you will find guys who want to put holes in you. There are lots of random neat things to be found like hidden science facilities, ancient temples, evil ninja campsites, etc. Not only are they interesting to encounter but they give you the opportunity to get some good loot. While exploring one planet I actually came upon a large monster that dropped an awesome legendary sword upon its death. Another time I found a secret facility that went deep underground and after traversing an electric death gauntlet I found a nifty boost power-up. Cool stuff like this makes exploring fun.

The game is still in what appears to be early beta and there does seem to be a lot of stability issues, but both Keen and I love what we’ve experienced so far. We’re eager to see where this game goes in the future and what is still left for us to discover.

Update: We wanted to post screenshots of our hobbit hole we were building, but today they wiped all characters.Â  To be fair, they did warn everyone that this would be happening frequently throughout the beta.