Activision was awesome enough to send us the Skylanders Swap Force starter pack so that we could share our thoughts on the game with our readers. We were both very interested to see how this year’s game would stack up, especially since it launched not long after its new, and wildly popular, competition Disney Infinity. Last year Giants game out but, while enjoyable, it didn’t feel like a huge step for the series. I admit to being more than a little concerned that Swap Force might not be able to hold its own. However… I should have known better than to count the Skylanders as down and out. 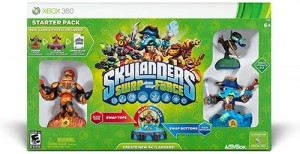 The first thing most people will look at after they crack open the starter pack is the figures. It comes with one series 3 figure (Stealth Elf, been around since the first game) and two Swap figures, the main pull of this iteration as the Giants were last year. Each Swap character comes in two pieces: A top and bottom. They are held together byÂ  some curiously strong magnets, which for me was probably more amusing than it should have been since I can’t stop pulling them apart and laughing like an idiot. All of the Swap characters, 16 in all, can change out their base for any of the others which gives you something like 256 possible combinations. So you can take the fire character and water character, and swap their pieces out to make two fire/water characters. It’s actually pretty awesome.

The Swap figures are slightly larger than a basic figure, but not as large as a Giant. Speaking of which, there don’t seem to be any new Giant figures but there are several new Swap Force branded regular and Lightcore figures. Some are old returning favorites while others are brand new Skylanders.

To be sure you are buying an actual Skylander with the ability to swap, look for the “Swap Force” black circular logo as seen on the packaging to the left.Â  This will alleviate some of the confusion as you come across many of the regular Skylanders still branded in Swap Force packaging. 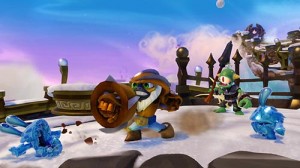 After we finished messing around with the figures Keen and I sat down for some co-op play. We were promptly blown away. The game has gotten quite a makeover since last year — it looks truly spectacular. I don’t know if it’s a new engine, but it looks and runs great. I wasn’t expecting such a vast improvement to the visuals. The rest of the game’s presentation is similar fare, but that’s not really a bad thing. Swap Force introduces a new and interesting area known as the Cloudbreak Islands where a volcano erupts every 100 years to replenish the magic of the Skylands.

The core gameplay is of course similar to the previous titles, but it does feel tighter and more polished. The greatest change would be the ability to jump. No longer do you feel glued to the ground. Now you can hop around like an idiot, which is one of my favorite things to do in video games. I would love to be able to double jump, though, but I’ll take what I can get. The game retains it’s mission-based format except now we’re back to having an interesting hub-world rather than the tiny airship from Giants. Each level still contains several hidden collectables, hats, hidden areas, etc. that usually require more than one play-through if you want to get everything. 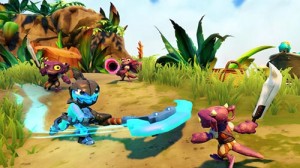 The Swappable characters add great level of depth and interest. The Swap Force characters play like traditional Skylanders except their abilities are separated between their top and base pieces. The top piece is the main character, gains the experience and money, and has the main attacks. The bottom pieces offer their own ability line and also provide different special abilities that let you unlock doors and gain access to special challenges. Both top and bottom abilities have their own upgrade lines and diverging upgrade path which gives the swappable characters more upgrades than basic figures. What’s really cool about this is that you can keep the main part of your character (the top) and swap out the base if you don’t like the second attack/ability, or if you want to gain access to an additional element to gain a stat boost or open an element door.

All of the characters from previous games also work in Swap Force but are pretty much limited to what they could do in their respective games, meaning they can only reach a certain level or may lack some of the new abilities.

Swap Zones are a new addition to levels.Â  These gated areas require your Skylander’s ‘base’ to provide the required special ability (located on the front center of the base and indicated on the bottom right of the box).Â  These Swap Zones act like replayable mini-games.Â  Dual-Element gates are another addition requiring you to meet both required elements to enter. You swap your Skylanders until you alone qualify, or you can meet the element requirements together with a friend.Â  These separate adventures yield great rewards and provide even more depth to the level.

The Price of Entry

The most common issue with a game like this is obviously the pricing. The toy-game genre can be incredibly expensive if you go in with a collector’s mentality. Some people may be able to afford it, but I’m sure a lot more can’t. The starter pack is around $75 and figures range anywhere from $10-$17 depending of whether it’s a Basic, Lightcore, or Swappable figure. The best piece of advice I can offer, which I gave when Disney Infinity came out, is be patient and wait for sales. These games almost always have deals going on somewhere, and you can easily get the starter pack for cheaper along with other deals like ‘Buy one get one 40%” off. Sites like CheapAssGamer.com are great for finding good deals.

I find that I’m having a similar reaction to Swap Force figures as I did to Giants. Back when I played Giants I pretty exclusively played as a giant because why the heck would I not be the bigger, badder, more interesting characters? The same holds true for Swap Force. Sure, I’d love to collect all of the new figures but realistically I won’t be able to. What makes it easier to deal with is the fact that I probably would be only playing with the swappable characters anyway and there are only 16 of those, which is a lot easier to swallow instead of 55+ and even more so if you want to cut it down to only 8 figures (One of each element). Even then you get like 64 different character combinations. Or you can even go for less than that if you want and utilize older figures. You’re still going to be able to enjoy the game.

Skylanders is still going strong and will easily hold its own in this continually growing genre. Both of us easily recommend the game to newcomers and fans of the franchise alike, but still cautiously advise not to go overboard on the buying like Keen did after we got our press kit in the mail.Â  He went out and bought every Swap Character causing the TRU employee to audibly exclaim, “Oh my god…”

Swap Force has definitely made us believers again.Â  We’re already making plans to hit up Toys’R’Us for some of the regular Swap Force Skylanders that look cool to us. Stay tuned for more posts on our Skylanders Swap Force adventure.

We give Skylanders Swap Force an amazing 4.5/5