I’m about 12 hours into Pokemon X and I finally decided on a team.Â  I think.Â  For every hour I’ve put into the game, I’ve probably spent 2 thinking about what team I want to build.Â  I have weird tastes.Â  I require the pokemon on my team look cool but also perform extremely well.Â  I’m also all about trying to build a team that will be balanced.Â  Oh, and I also do not care at all about anything other than in-game normal play.Â  I’m not into tournaments or playing against other trainers.

Without further ado… here’s my team.Â  For now. 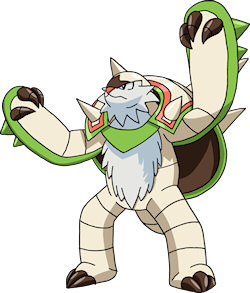 I picked Chespin as my starter for one reason: He is by far the cutest pokemon starter.Â  His final evolution, however, is… bizarre.Â  I ultimately decided I could keep him in my team because I imagine he’s a little cute guy inside of a suite that looks like it belongs in something like Dawn of War.Â  Figher/Grass has proven to be a great combo so far, and I hope it continues to perform. 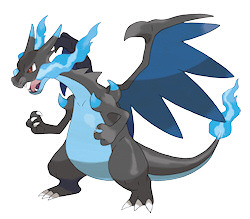 I’m slightly bothered by the overt favoritism Charizard has received.Â  Squirtle is my favorite original starter pokemon, and when Professor Sycamore offered to give me one of the original starters it was tough to have to choose Charizard… he just looks so dang cool.Â  To top it all off, in Pokemon X he becomes Dragon/Fire — gotta have that Dragon.

Two words: Psychic Dark.Â  Malamar is also physical and has an amazing ability called Contrary: All effects that lower stats increase them instead.Â  Using superpower I can attack with Malamar and instead of losing attack and defense I gain it instead.Â  How ridiculous is that? 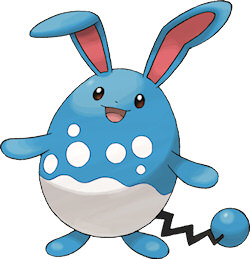 I was originally against the idea of taking on yet another older pokemon into my team.Â  I was desperate for a water pokemon, and was actually looking at that new barnacle guy when Graev told me that Azumarill is now a Fairy/Water now — that’s the only Fairy/Water pokemon, and I’m pretty sure he’s physical attack as well.Â  Stack that with his ability called Huge Power (double attack) and you have the recipe for yet another ability combo. 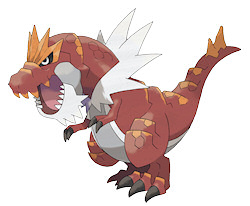 He looks cool.Â  Really, that’s the reason I chose him.Â  Don’t get me wrong, Rock/Dragon is a cool combo too but just look at him!Â  I think he gets some nice physical abilities like crunch and dragon claw too.Â  Honestly, playing in-game only I think I can settle for taking a pokemon based on looks.

That’s my team!Â  I have one spot left that will probably be used for a slave who will carry all of my HMs.Â  If I end up wanting a 6th I will take Heliolisk to round it out with eletric.

One of the biggest things I’m excited about in Pokemon X and Y is how accessible the ‘meta game’ is for trainers.Â  ALl of this EV IV whatever its called is really transparent now with the super training.Â  I can run each pokemon through a series of minigames and make their stats exactly how I want them.Â  I’ve never been interested in min/maxing Pokemon — I would rather pretend they are my friends — but given the chance to make them super powerful AND my buddies how can I resist?

Have you decided on your team?