I’m a sucker for most anything TellTale and was quick to pick up the first season of The Wolf Among Us. For some reason the TellTale store couldn’t quite get it together and release with everybody else. Although a bit delayed, The Wolf Among Us was definitely worth the wait.

I’ve never actually read any of the comic books that the game is based on but I do remember hearing about ‘Fable’s when shows like Grimm and Once Upon A Time were coming out, which were the result of failed efforts to adapt the comic into a TV series or something like that. If I was the guy(s) behind the comic I would be a little irked by that. Anyway, having played the first episode and having watched both shows it sure seems like Fables is basically a mix of both TV shows except a good deal darker and edgier. Or whatever word that implies tons more F-bombs and violence. 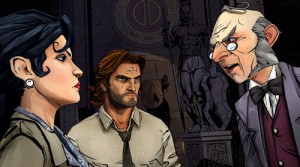 You play as Bigby Wolf (Big B Wolf, BIG BAD WOLF, hard har, etc) who is the sheriff of Fabletown — a place somewhere in New York City where all of the exiled fairytale characters live. You got characters like Snow White, Mr. Toad, Ichabod Crane, Beauty, Beast, and so on. I won’t give anything away but the basic premise of the game is that you have to solve a murder that occurs and find out what’s really going on which I imagine will eventually wrap up with the final episode. The characters are really interesting and the whole setting and backstory are incredibly fascinating to the point where I’m tempted to go out and buy some of the comics. Supposedly the game IS canon but takes place before the events of the comics so you won’t really spoil one with the other and so on. 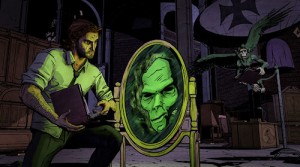 The game plays almost exactly like The Walking Dead. TellTale has begun to move away from the classic adventure design and more towards an interactive story experience. Your inventory sits off to the side but you don’t seem to be able to manipulate it in any way. You can still find items along the way that might be of use to you later, like a matchbook or piece of evidence, but so far nothing is really needed to progress the story. Either way you’re getting to the end but what you collect and your choices determine what happens and how you treat people can come back to help or haunt you, especially later down the road in future episodes I imagine. I suppose this allows for a lot more replayability since you can make several different choice combinations along the way but it seems to come at the expense of any kind of puzzle element of which there are none to be seen so far. All of the games action sequences are handled in a quick-time-event fashion that requires the pressing of certain directions or click certain areas within a time limit. Some people loathe QTEs and I’m not necessarily a fan myself, but they don’t bother me enough to turn me off.

I’ve played through episode 1 a few times now and I’m already comfortable saying that it’s better than The Walking Dead, which never really hooked me quite this much. It may not be the kind of adventure game that I wish it were (I pretty much wanted Discworld Noir 2)Â  but it’s still a fantastic experience.