I’ve been spending most of my time playing Wind Waker HD lately. It’s not really my favorite game in the series but that’s like saying “banana” isn’t your favorite Runts flavor. It’s still delicious and you’re going to eat it anyway.

I think I’ve actually only played the original Wind Waker once back on Gamecube. At first that seemed kind of odd but now that I think about it there are several Zelda games I’ve only played once. Actually, probably most of them with the exception of Link’s Awakening and Ocarina of time. Still, I have a fairly good recollection of the original and I’m quite glad to see some of the following updates they have made to the game.

Wind Waker was probably the easiest game to give an HD update. The visuals were already fantastic, timeless, and now they look even better. The cel-shaded art style is one of my favorite in the series but I guess that is something that will differ from person to person. I still remember several years ago when people were crying and bitching about the “cartoon” graphics and the lack of pretty-boy adult Link. Those people can screw themselves and take their werewolf Link with them.

Still, there is one thing that bothers me… Nintendo went a little nuts with the bloom lighting. It’s like they hit a point where they used too much bloom and figured they’d try to cover it up… with more bloom. Other than that I don’t have many complaints. The game seems to run perfectly fine and the only time the game “seems” to slow down is when you are killing multiple baddies at once or setting off many explosions. I think that’s due to the zantetsuken-style effect, though. There’s a slight freeze or slowdown for effect. Personally, I don’t care for it; not enough that it bothers me, anyway.

Things seem largely unchanged. There have been some slight changes and additions but other than that it’s the exact same game and it plays great. I heard that they sped up the timing on the Wind Waker and the treasure hauling but I honestly don’t remember well enough to tell the difference. In the original game you could acquire the Tingle Tuner which was a device that (I think) let you plug your GBA into the GameCube and use it as a little companion device during play. I think I used it once so I have no real idea. Anyway, that’s of course gone and in its place is a special message bottle that you can write notes in and add pictures which then get uploaded to Miiverse. While running/sailing around the overworld you can actually find the messages from other players. It’s kind of cool but as time went on I found myself veering away just to avoid collecting more of them. One cool bit, however, is you can share specific pictures that are required for the figurine collecting side-quest. Pretty nifty in case you missed taking somebody’s picture, etc.

The absolute BEST addition to Wind Waker HD is the new Swift Sail, which can be acquired from the auction house on Windfall Island. Not only does it let you sail across the vast ocean world MUCH faster but it also automatically changes the direction of the wind to always be at your back. I knew it made you go faster but when I found out about the second bit it felt life-changing. No longer will you have to pull out the Wind Waker, conduct the tune, pick the wind direction, and watch the 4 second cutscene and chime. When I told Keen about it he said something like, “Oh, so it’s like cheating?” Obviously he’s never played the game or he would know the sweet deliverance this sail brings.

If the original game wasn’t hard enough then fear not! Hero Mode has been included in this version and can be used right from the start. What is it, you ask? It’s a mode where you take twice as much damage and get ZERO heart pickups. The only way to heal is via fairy, potion, or finding a heart piece/container. Essentially it’s for people who hate themselves and like to take all of the fun out of their game, like myself. Honestly, it’s not that bad. It’s a little rough at first but after you get more heart containers and bottles then it essentially becomes a non-issue. Really the only thing that bothers me about it is how it makes cutting grass and breaking pots feel a little empty when nothing pops out. Of course you still get rupees and other trinkets every now and then but the hearts are missed. 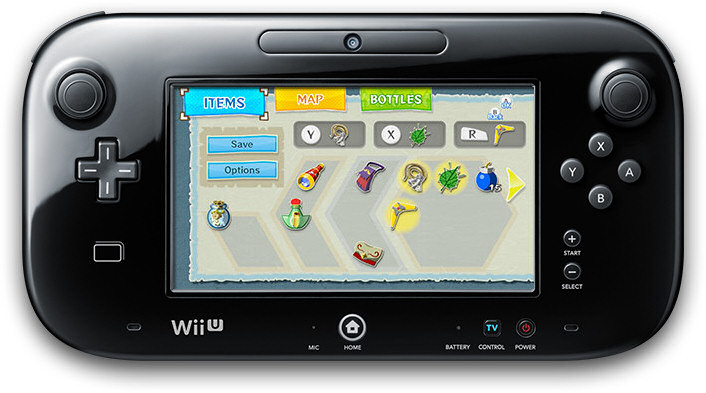 I really like using the gamepad in this kind of game. It makes swapping items on the flyÂ  super easy and fast. Not only that but having your sea chart and dungeon maps at hand is incredibly useful. You can even use the controller’s gyro sensor when using various devices that require aiming. At times I find that particular element useful but even if I hold the device perfectly still I still seem to get some wobble being detected. You can turn it off if you really want to, and I’ve been tempted many times, but it does sometimes feel easier for more accurate targeting. Especially if you suck at aiming with a control stick.

You can also play the game entirely off-TV, which I love.

They did a really good job on updating the game. It may not be a remake, but it is much more than just an HD update with all of the additions and changes they threw in, of which there are more of than I even mentioned. I’m still crossing my fingers that we will get a Majora’s Mask updated game.Â  Until then, this will tide me over until A Link Between Worlds. I’d highly suggest picking up Wind Waker HD even if you didn’t care for the original. I know the sailing aspect turned a lot of people off but it has been made a lot better. With any luck this will give the Wii U a little boost in sales, which it really needs. If this doesn’t do it then hopefully Super Mario 3D world might.