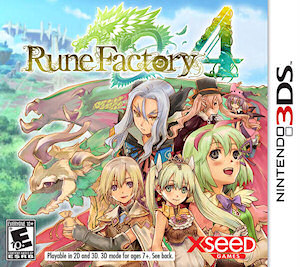 Who doesn’t love farming crops and fighting through dungeons? Horrible people, I imagine.

The new Rune Factory game came to 3DS a few days ago and I’ve been diving into it between Fate grinding, working through my gaming backlog, and staring at the GTA Online loading screen. Even though I’m a big Harvest Moon and Rune Factory fan the only RF games I’ve played are the first and the Wii version, which was pretty awesome and I probably wrote about. So here are a few thoughts and observations I’ve made. Maybe they aren’t new to the series, but they are new to me.

+ Farming has been updated from what I last remember. Water crops, even with a low level can, can be done extremely fast. You also don’t seem to be able to accidentally lose seeds either, which is really nice.

+ Stack items when picking them up! No longer do you have to pick it up, put it away, repeat. You can pick up 9 of the same item at once into a comically tall stack the teeters when you run. Then either throw it, stash it, etc. Really efficient.

+ The game looks fairly nice, even if it’s a bit simple. Not really anything you probably couldn’t find on a regular DS, though.

+ Fighting monsters is pretty good. When you stats go up you can learn new abilities with the weapons. Each weapon type actually feels different.

+ Prince/Governing system is pretty cool. Complete tasks, earn points, use them to make additions, upgrades, etc. I’m curious to see where it goes.

– The 3D effect is bad. Like, really bad. The majority of the game background is 2D art while the characters are 3D models. When you turn the 3D effect on the background mostly remains flat while the characters, monsters, etc all pop up. This creates a really bizarre floating effect and downright screws the how things look, proportionally speaking.

– The overall character design is a little lacking. Nobody really seems to stand out and it feels a bit generic.

– The general tone of the game is a bit odd. I’m not sure if this is a translation deal or what but some of the conversations don’t seem to make a lot of contextual sense.

I’m not far into it enough to say whether or not I like it more than RF: Frontier, but from what I’ve seen so far it’s really enjoyable. It’s a lot of fun if you like the farming/social aspects of Harvest Moon but also want something more to do like dungeon crawling. The best part is that there is no Runey balancing, which is what eventually made me drop Frontier after 100 hours. I’m looking forward to spending quite a while with this one.