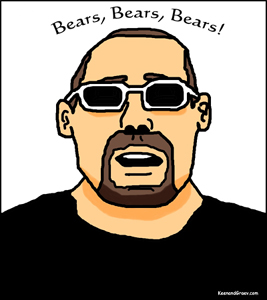 The time has finally come — Warhammer Online Age of Reckoning is shutting down in December.Â  Sometimes I forget the infamously botched MMO is still around, and other times I am reminded of the horrific mistakes I made during the anticipatory hyping period prior to its launch.Â  I made a mistake.Â  I was sucked in by horrible marketing because I was desperate for a good MMO and blinded by my hope and belief that DAoC could actually be repeated by the same studio.Â  I still believe I am the self-proclaimed biggest WAR Fanboy of all time.Â  I made today’s crazies look sane.

We don’t need to rehash the awfulness that is WAR.Â  Promises were broken: Bears bears bears.Â  Promises were kept: WAR has Five Years of Content (I’m laughing out loud right now at the irony).Â  Carrie Gouskos (who was the Tomb of Knowledge person when I interviewed her back in 2008), now Producer, says she doesn’t think WAR’s critics would ever call it boring. No… no, it was pretty dang boring.Â  Honestly, the RvR was horribly boring.Â  The PvE was dull.Â  Then world was uninspired despite being set in one of the best-known fantasy IPs ever.Â  It wasn’t good. 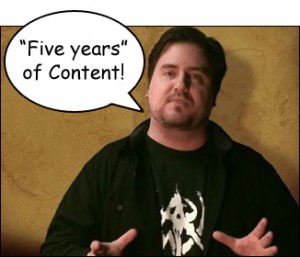 Carrie is right about one thing, though.Â  WAR absolutely introduced features which are now considered industry standards.Â  I still remember sitting down with Mark Jacobs for an interview during E3 2008.Â  We sat in a little side room of EA’s big E3 booth.Â  Mark, Graev, and I sat at this circular table and Mark let me bombard him with questions.Â  Besides Mark’s shirt (which I believe was a black polo) only one thing has stuck with me… Mark said, “Public Quests will be something game developers blatantly rip off for years to come.Â  It won’t even be subtle.Â  That’s what developers do – we steal each others ideas.”Â  (Slightly paraphrased).Â  Sure enough, five years later developers are still blatantly ripping the idea.Â  I don’t know if I should laugh or cry.

Seriously, let’s think about what we can learn from all of this.Â  If some good can come from WAR, I hope it’s developers everywhere learning that it’s not enough to think you have a ton of great ideas, a history of success, and a fanbase.Â  If you put it all together and your game just isn’t fun — you failed. Â  Personally, I learned how not to market a product — a lesson which has stuck with me now into my marketing career.

So long WAR.Â  Please take the last five years with you.