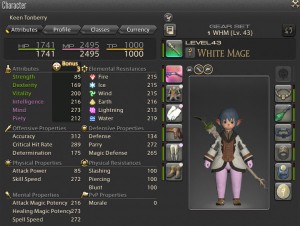 When Square announced they would be adding a dungeon finder to FFXIV it was only a matter of time before they added the item level mechanic.Â  Sure enough, it was announced that iLvls will be added to gear soon, and dungeons will do checks to ensure characters are properly geared before they are allowed to enter.

My reaction is mixed.Â  Gear checks are needed.Â  I’ve healed way too many dungeons with a tank who can’t hold aggro, or even one who dies in 2 hits because the gear he’s wearing is 20 levels lower than the dungeon.Â  I can teach a tank who doesn’t know how to play, but I can’t help someone who decided to grind fates then join a dungeon.

On the other hand, I hate the gear mentality.Â  I’m already seeing the “LFM Ifrit HM – Be geared”.Â  When iLvl makes it in, players will be saying “LFM Ifrit, iLvL 260+ only”.Â  There’s an elitist mentality with a pattern of discrimination.

As long as players don’t become jerks about it, we’ll be fine.Â  Since that will never happen, I hope that iLvL is limited only to dungeon finder and not visually represented on the character sheet as seen on the right.